The majority of the open ocean is like a biological desert because of the limiting factor of low available nitrogen.  What is there can be removed by - sea birds depositing guano on land, commercial and sport fish harvesting, and detritus and dead organisms carrying it to deep water and eventual loss to geologic deposits on the sea bed.

The first two sources of removal are somewhat balanced by return to the sea by rivers containing fertilizer and food nitrogenous components.  That makes coastal waters more productive than the open sea.  The second source of removal  can also be balanced by return due to up-welling currents producing high productivity in some localized regions in response to some cyclic weather induced currents.  Once in the deep sea deposits it is mostly trapped for long periods of geologic time.  But before it is trapped, a significant amount can be returned to surface waters by sperm whale intervention.

Sedimentation of small organic particles in the open ocean is very slow.  They can be recycled in intermediate level food chains before the component nutrients reach the seabed.  One particularly effective avenue for recycling is the intervention of ammoniacal squid that live at considerable depths in the ocean and accumulate ammonia from protein metabolism as a flotation material.  A portion of that accumulated ammonia will be returned to surface waters by sperm whales feeding on those deep water squid as well as giant squid.

The great reduction of sperm whale numbers has probably been a major factor in decline of some marine fisheries.  The reduced growth of phytoplankton diminished both the amount of food to those higher in the food chain and their ability to recover from over-fishing.

Fortunately, very little harvesting of sperm whales is occurring today.  But recovery to former numbers is very slow because so few are left, and their well-being in terms of learned culture passed on socially may have been impaired.  I tried to alert congress and our representative to the United Nations (in the 1970's) of the need to protect sperm whales to save fisheries.  About the same time there developed an international consensus to ban sperm whaling.  But Japan did not join the consensus and continued to harvest some for sperm whale research for a while.  I wrote a paper for a Japanese newspaper competition for submissions on environmental matters, but it did not get accepted.

I thank Dr. Patrick C. Kangas, then at Eastern Michigan University, later at the University of Maryland, who alerted me to much of the quantitative contribution aspect of sperm whale intervention.

Living giant squid have recently been shown on television for the first time.  An introduction to some of the data used above can be found in Berzin (1972) and Clarke (1977).

Posted by Evolution Insights at 9:10 AM No comments:

Whales are impressive animals.  The largest are said to be even larger than the largest dinosaurs.  My specialty deals with mostly very small animals, the invertebrates.  But the largest invertebrate, the giant squid, is a  food item for the sperm whale, the largest of the toothed whales.  During the time when sperm whales were relentlessly hunted for their oil, stomach analyses showed that squid were a major part of their diet.  Perhaps the most abundant squids in their diet were ammoniacal squid which live at great depths and retain high levels of ammonia compounds from their food.  The stored ammonia is thought to serve as a flotation device reducing the squid's need to swim to avoid sinking.

Records of sperm whales from whaling days showed the average size was considerably larger than today.  Some of the largest males had deformed teeth suggested greater age than the largest sperm whales of today.  Tooth layering suggests the large ones in recent years approach one hundred years in age.  I think it may have been my search for long-lived animals triggered by my findings about extreme longevity in the deep sea (evolutioninsights 6/22/2013 post) that triggered my interest in sperm whales.

The large males dive deeper and stay down longer than any other mammal.  Perhaps the pressure is an additional factor in their ability to stay submerged for so long in addition to the known factors of high levels of myoglobin for oxygen storage in muscle and circulatory shifts to keep essential organs functioning.

The deep dives go into water only a few degrees above freezing in temperature.  The layer of blubber on the body not only insulates them from the cold, but because fat is much lighter than sea water it balances some of the weight of the heavier than sea water bones.  Much of the volume of the enormous head is filled with oil containing organs which counterbalances the weight of the bones of the skull and jaws.

The blue whale is the largest whale and is one of the baleen whales that feed extensively on krill.  Krill are small crustaceans, but very numerous in some colder parts of the oceans.  Baleen is the filter on the whale's jaw that sifts out the krill from enormous quantities of water.  The blue whale may be able to select a layer of water where the krill are concentrated.  Some baleen whales are known to concentrate food organisms by circling a cluster until they are in a dense column that they can take much of into their enormous mouth cavity and filter them from the water.

Whales seem most closely related to some ancient hoofed mammals.  They branched off from our evolutionary line millions of years ago.  I will have one or two more posts on aspects of sperm whales not generally covered in discussions of their natural history.  One is their unusually important role in marine food chains, the other is an overlooked function of the oil storage organs in the head.

Posted by Evolution Insights at 8:10 PM No comments:

Annelids, arthropods, and mollusks are three major invertebrate phyla, with coeloms and blood vascular systems, that have successfully expanded from probable marine origins into freshwater and terrestrial environments.  Their close relationship was suspected for over a century because of the annelid cross.  The annelid cross was a peculiar relationship of four cells found in at least some of the early embryos of all three phyla.

Annelids and arthropods are easily seen to be closely related because of their obvious metamerism, cuticles, and general relationships of some systems.  But all but some recently discovered mollusks lack obvious metamerism.  So which came first, mollusks or metamerism? 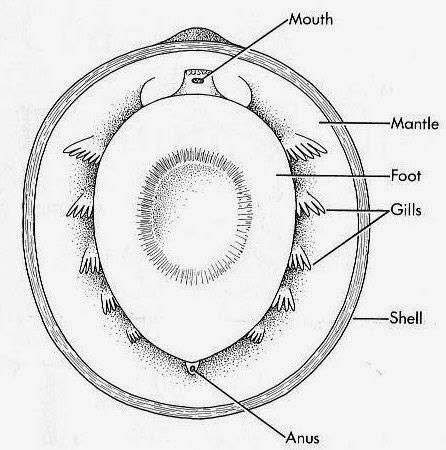 Ventral view of the external anatomy of Neopilina

The discovery (Lemche an Wingstrand, 1959) of a living member of the Monoplacophora, Neopilina, in 1952 helped answer the question.  It had obvious remnants of metamerism in paired nerves, blood vessels, and muscles.  The single pair of ventricles straddled the posterior portion of the gut and helps illustrate the way the unusual perirectal ventricle of bivalves evolved to enclose that portion of the gut.

McAlester (1964) provided further evidence of the monoplacophoran-bivalve connection with the intermediate fossil, Babinka.  Figure 9-41 (above), on page 479 of
Invertebrate Zoology, 3rd ed., by Engemann and Hegner (1981) illustrates the transition of muscle scars those of modern bivalves such as the clam, Anodonta.

The fossil studied by Sutton et al. (2001) helped fill the gap between polychaete annelids and mollusks.  They reported it had a polychaete-like body with 7 small calcareous dorsal valves spaced along the dorsal surface.   They named it Acaenoplax hayae gen. nov. and sp. nov. in Phylum Mollusca, and the fossil they “interpret as a plated aplacophoran.”  Structure was determined by computerized reconstruction of serially ground sections.  The only internal structure was a tube in some sections thought to be a gut.  A space may indicate the position of an undeveloped valve.  The posterior 7th valve has a ventral portion as well as a dorsal portion.  About 18 ridges circling top and sides bear setae and give a polychaete-like appearance in their photos.
The molluscan shell as a cause of loss of metamerism

The success of the cone-shaped shell and the muscular foot may well have made the survival value of repeated structures less valuable for survival.  Hence the loss of appendages and segmentation was promoted by the protective shell.

It is easy to make a transitional series of gastropod shells from limpets to elongated and spiral shells arising from the monoplacophoran type.  From gastropods with siphons to cephalopods with their jet propulsion is less clear but quite likely.

McAlester, A. Lee.  1964.  Transitional Ordovician bivalve with both monoplacophoran and lucinacean affinities.  Science, 146:1293-1294.  Babinka has muscle scars intermediate between the monoplacophoran, Neopilina, and modern bivalves.