I recently finished reading The Sixth Extinction by Elizabeth Kolbert (2014, Picador Press of Henry Holt and Company under license from Pan Books Limited).  I was even more impressed by the book than I was by the interview of the author by Brad Plummer noted in my comments in a March 6, 2014 post -

, a post only accessed three times in the past three years, the same amount the immediately preceding post had during the same interval.

Kolbert does a remarkable job of presenting understandable and interesting accounts of extinctions, especially of the one humans are now causing, beginning with ice age humans.  I discuss the role of pre-Cambrian “origin of sex” being catalyzed by extinction events that may have been more numerous and violent than the six major extinctions recognized in subsequent eras.

She notes the current adoption of Anthropocene epoch as the beginning of a new era shaped by changes in the fossil record due to human activity.  The most notable change is the greatly increased rate of extinction of species.  Maybe we should have an additional label of Plasticene, or something comparable, for the sedimentary inclusion of a marker of plastic bags and other debris with which we have littered and labeled our environment.

As an adjunct to her remarkable book, it might be worth noting the brief essay on Numbers of Species in the post noted above.  It precedes the one on the Origin of Sex in the same post.

Her account of the extinction of the Great Auk (chapter III, The Original Penguin) filled a void in my background about the bird but is typical of our heedless behavior in causing species extinctions.  The extinction affecting many frog species (chapter I, The Sixth Extinction) may have taken longer without our aide in spreading the causative microorganism.  Rainforest, bats, and other current problems are all very worth reading.

I was especially saddened by the update on the demise of corals.  The double whammy of acidification of the ocean and ocean warming make recovery or coral reef ecosystems very unlikely during our lifetime.  But her description of her visit to One Tree Island as well as Heron Island brought back memories of a week I spent on Heron Island sixty years ago.  The hazardous walking on “pie crust” which she describes is mostly just on the tips of staghorn coral that seem sheared off by their inability to grow above low tide level. 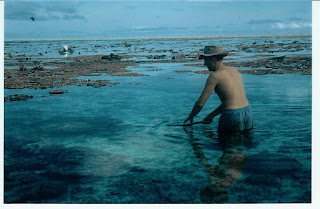 Although her background is as a writer, especially for The New Yorker, she consulted with many scientists and, I think, reflects quite accurately current views in a very understandable and interesting way.  Her book may have the impact of Silent Spring by Rachael Carson about fifty years ago.

Posted by Evolution Insights at 1:07 PM No comments: