Laudato Si' is the title of a letter to the faithful that Pope Francis had been preparing for the past year and finally released in the past week or so.  Popular press accounts indicate he comes out firmly on the side of those indicating human activities are major contributors to global warming, a view shared by most informed scientists.

Human activity is more than just "the straw that broke the camel's back", even though non-human factors are the major determinants of climate.  We are currently contributing to a rise in temperatures above the temperatures variations produced by natural cycling due largely to solar output and lesser factors such as volcanic activity.  Does it make a difference whether we are adding one or more shovels full of straw to break the camels back?  While we argue about it the damage is being done.

Our plundering of resources is somewhat difficult to see as degrading the environment until the damage is severe.  Pollute the air or rivers and others downwind or downstream will pay the cost in lung disease or polluted water.  Wealth often comes to the ones polluting; meanwhile the poor lack the resources to purify their water and/or their air.  Pope Francis is apparently adding his voice to those recognizing the problem.

THE TRAGEDY OF THE COMMONS

Near the middle of the past century Garret Hardin wrote an essay entitled The Tragedy of the Commons.  He used the example of earlier times in England when townspeople could pasture their cows on a central green area free to all.  As some found they could sell more milk by having more than one cow they added to their herd.  As others did the same the greens became overcrowded and cows gave less milk so one cow was no longer enough to feed your family.

Common resources include natural areas, our waters and our air, our view of the sun and the stars, and perhaps also our mineral resources.  It is difficult to manage many natural resources that are international in nature.

We still have a lot to learn.  I thought I had considered the important facts when I proposed the sperm whales had a significant role recycling nitrogen in the ocean food chain as illustrated many years ago by the following figure. 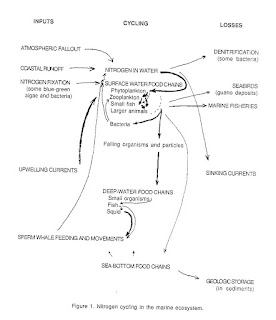 Then, after reading a 2010 book by Claire Parkinson discussed in the post,
http://evolutioninsights.blogspot.com/2013/11/science-whales-and-climate-change.html , I realized I had not considered its role in the oceanic carbon dioxide sink and climate change as noted in the post.  The post of May 17, this year  [ http://evolutioninsights.blogspot.com/2015/05/abyssal-ocean-environment-and-extreme.html ] has some concept of how global warming may have a role in hurricane intensity patterns.

The phrase in Latin was the motto of my undergraduate college.  I have found that, especially in biology, the sciences benefit from realizing things are seldom only black or white, but most often some intermediate shade of gray.  We are seldom extreme introverts or extreme extroverts, most are somewhere else along the spectrum between.  When studying the environment there are multiple causes functioning in most things under observation; so simple answers are not easily given.  Such a fact should not be an excuse for doing nothing to improve our environment.

Posted by Evolution Insights at 12:58 PM No comments: