STEPS TO A REMARKABLE EVOLUTIONARY DISCOVERY

Discovery of the extreme age of the likely longest-lived animals on this planet was a slow process over many years.  It involved the combination of many discoveries by others that has not yet been comprehended by my peers, many of whom are much smarter than I am.  That the animals, the Pogonophora, are also closest living relatives of the link where the change from one major branch of the animal kingdom, the protostomes, gave rise to the other major branch of the animal kingdom, the deuterostomes, becomes understandable and obvious when all the facts are considered.

Getting ready for the discovery.

My early dreams as a biologist were to focus on some obscure invertebrate, that no one was interested in, so I could be the world's expert on an organism.  I didn't intentionally pursue that goal in graduate school, although I realized that many important discoveries had been made by people who were not looking for their discovery.

My master's degree research was about colony growth rates of a protozoan and its lipid cytochemistry as related to culture pH.  For that, Dr. Richard Fennel was my advisor at Michigan State University.

I began doctoral research at The University of Tasmania with the aid of a U.S.  Fulbright Scholarship to Australia in 1956.  A planned study of river pollution as indicated by invertebrates of the Derwent River was abandoned as impractical.  The chair of the zoology department there, Dr. Vernon V. Hickman, suggested a poorly known isopod crustacean living in pools on top of Mount Wellington as a good object of study.  It was.  Dr, Eric Guiler became my mentor for the isopod study while I was at the University of Tasmania.

Dr. T.  W. Porter became the chair of my doctoral committe at Michigan State University.  On my return, the committee thought I should enlarge on the comparative studies of the Tasmanian isopod with a somewhat ecologically equivalent Michigan isopod.  Both lived in temporary ponds approximately the same distance from the equator.

The isopod study provided background for understanding principles related to adaptive changes, early embryological development and extremes of life cycle length associated with anatomy, physiology, and environment.  I had no premonition that I would find it was preparation for recognizing important elements of the life cycle extremes, anatomical, and embryological adaptations of an organism with such evolutionary importance as the Pogonophora.  At the time I, like most biologists, had not even heard of the Pogonophora.

Developing an interest in Pogonophora.


The interest came gradually as I taught invertebrate zoology and found out about the new minor group of worms, the Pogonophora, having no mouth and no agreement on how they took in nutrients.  The experts asserted that they were minor, degenerate, dead end, tube-dwellers of no evolutionary importance.  I found them interesting for having so many rings on their tubes, a possible indication of greater than usual age.  Most species were found at great depth, embedded in the ocean bottom.

Western Michigan University was the host of the C. C. Adam's collection of books and journal papers collected by the early ecologist.  The C. C. Adams Center published a series of ecology papers and used the publication in exchange for other publications.  One was Sarsia, a Scandinavian publication I might never have otherwise encountered.  M. Webb had several research reports in the 1960's; in 1964, two of special significance were published.  The first, described a rarely recovered rear portion of the worm with annelid like segmentation and setae.  The second, described a clear section of tube around the worm where it had broken through and secreted fresh tube.  It was similar to the upper portion of the same tube and indicated the tube was stationary in the sediment.

Webb's above findings sent me back to studies of marine sediments that show abyssal sediments accumulate very slowly,  The probable near vertical orientation of tubes and stable positioning, their length, and widespread distribution in the abyssal oceans where sediment accumulation rates are often extremely slow supported a conclusion that the worms reached great age.  Cold temperatures and low food supply seemed to support the idea of very slow growth when I put a question mark at the end of the title in a short paper, "Pogonophora: the oldest living animals?" published in 1968.

Multiple studies found various indications of probable slow metabolism in the deep sea.  One of the most dramatic was the very low rate of bacterial metabolism indicated by the excellent condition of food after eight months in the submarine "Alvin" before  its recovery related by Jannasch et al. in 1971.

A recent post about ocean circulation showing the thousands of year needed for polar water to reach the surface indicates very slow respiratory rates in the deep sea.  It is more dramatic when you see many locations have high numbers of brittle stars in the photos illustrating Heezen and Hollister's 1971 book, The Face of the Deep.

Questions about nutrition of pogonophorans make the absorption of nutrients from pore water in the sediments a likely answer since Southward and Southward (1982) have shown that they can absorb nutrients from water where the concentration is as low as that found in deep sea sediments.

Studies suggesting the pogonophorans are the missing link.

I am embarrassed that I was so slow to see the pogonophorans as the link between protostomes and deuterostomes.  I was quite content with the posterior segmented body section discovered by Webb and the possession of chitin as reason for their polychaete ancestry.  The report of Gans and Northcutt in 1983 that developmental features of pogonohorans put them among the deuterostomes was unbelievable.  My distress was short-lived when I thought it was impossible unless they were an intermediate form; all the answers seemed to pop into my head- how that would explain the inversion, the changed embryology, and the hemichordate resemblance.

There are many more features of advanced protostomes and deuterostomes made understandable by common ancestry instead of convergent evolutionary origin,  The different evolution rates possible are also well illustrated by understanding the pogonophoran's evolutionary position.  My isopod study, teaching a broad range of biology courses, and having to write a new section on pogonophora, provided needed background for discovery of the important evolutionary role for the supposed evolutionary dead-end, the Pogonophora.

Posted by Evolution Insights at 1:10 PM No comments:

Annelid worms are ancestral to all of the advanced major phyla.  Arthropods and mollusks retained annelid features as one major grouping of advanced phyla.  Chordates and echinoderms are the other major grouping.  The two groups share some common feature as a result of their annelid ancestries.

There are eight posts in this blog-site from 6/17/13 to 6/30/13 that are a more extended description of the basis for accepting the annelid theory of chordate origin.  The annelid theory eliminates the need to (1) assume a second early origin of segmentation and/or metamerism from acoelomate protostomes, (2) explain numerous bits of molecular similarity between coelomate protostomes and deuterostomes, (3) and, with the incorporation of information about the pogonophoran bottleneck connection provided in this blog, provides a logical rationale for the embryological differences as well as the mechanism of inversion of systems in the transition of protostomes to deuterostomes.

The pogonophora are fairly well established as close relatives of some marine polychaete annelids.  The fossil record provide very little evidence of events, but some annelid descendants clearly  existed during the pre-Cambrian.

Step one.  Tube-dwelling worms such as Sabella, started the rotation as they reoriented their posterior to a position in the sediments and left their plumose tentacles up in the water.

Step two.  Those becoming pogonophorans had multiple changes selected by the rigor of life at constantly increasing depths as they struggled to survive asteroid bombardments in the pre-Cambrian.  In particular, low metabolic rates due to abyssal pressure and temperature, tubes extending deep into the sediments for absorption of fossil nutrients, as well as retention of a blood vascular system to transfer oxygen from the water to the embedded end of the worm deep in the sediments, and loss a many non-essential features.  The thinning of the eggshell enabled dropping the spiral development of annelids and the ability of eggs to develop even if some cells were lost.  Loss of obvious segmentation left only a remnant of segments at the  posterior to anchor the worm in its tube.

Part  of step two was the reduction of the digestive system, particularly the mouth and esophagus.  This allowed the later fusion of the ganglia of the head into a brain blocking the mouth formation on the old ventral side.

Step three.  As asteroid caused extinctions in the surface areas of the oceans eased, progeny of the abyssal worms survived as they moved into shallow water and benefited by mouths developing where gut remnants touched epidermis on  the old dorsal side.  As they extending from their tube they now would use their relocated mouth to feed on particulate matter in their vicinity.

Step four.  As they increased their activities they were doing it with the old dorsal side now the new ventral side.  SO THE WORMS DID NOT ROLL OVER, THEY DID A BACK-FLIP as they made their transition from annelid to pre-Chordate organisms during the pre-Cambrian.

Referring to the February 27, 2015 post on "Evolution: the body cavity" may help you understand the bit about relocation of the mouth above.  The March 2, 2015 post on "Abandoned theories and Libbie Hyman"  has a brief discussion of the annelid theory and an associated figure.

THE IMPORTANCE OF THE REGRESSIVE  POGONOPHORAN STEP

The loss of features as pogonophorans adapted to life in the deep sea were essential factors enabling the climb to the branch of the animal kingdom known as the deuterostomes, with the vertebrates members dominating life on earth.  It enabled rearrangement of the head with fusion of ganglia into a brain and mouth formation on the former dorsal surface, simplified embryology of radial cleavage and delayed determination of first cells of the embryo.  The loss of ability to form chitin in deuterostomes meant other structural materials became more important.  Hemoglobin is the only blood pigment surviving in deuterostomes although a diversity of blood pigments are found in annelids prior to the pogonophorans.

There are other major and minor animal groups that are side shoots at many positions along the groups of the tree of life leading to as well as following the significant deuterostome branch.  They continued, some becoming extinct, others diversifying into forms still present.  One major group of arthropods, the trilobites, dominated paleozoic seas before becoming extinct.  The sponges of today no longer include the group giving rise to early protostomes. 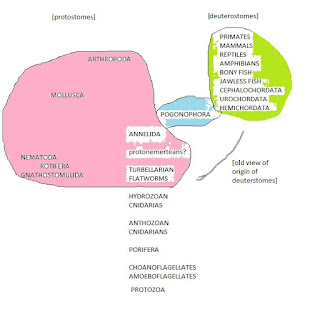 The above figure shows the central sequence of protostomes leading to annelids from which all above them trace their ancestry and have coelomate body cavities.  The sequence follows a time sequence of origin of groups having living representatives (except for the hypothetical protonemerteans).  The pogonophorans provide a transition from coelomate protostomes to the vertebrate line that clarifies the transition without the mystery of many unknown ancestral groups coming from flatworms.

Many invertebrate groups such as ctenophorans, chaetognathans, lophophorates, echinoderms, sipunculids, extinct groups, and many others are not represented in the diagram.

Posted by Evolution Insights at 6:10 PM No comments: