THE TREE OF LIFE

The revised tree of life described in the previous post lacked any illustration to aide understanding.  The transfer of files to a new computer, operating system and associated software (Windows Vista to Windows 10) has delayed production of something suitable.  I was eventually able to find Paint embedded in 10.  But my attempt to modify the diagram below with color to clarify the protostome and deuterostome groupings left an illustration dangling somewhere in a jpg file that I have not been able to migrate to this blog.

The protostomes began with platyhelminthes, the flatworms ancestral to other protostomes, and eventually deuterostomes via annelids.  The anthropocentric view showing primates upper right as the ultimate chordates is only for illustration of our lineage.  Every living group could have an illustration showing their group at the peak.  Some hint of this is shown with wasps and flies being groups of insects at the upper left.  And at the far left the cephalopods are perhaps the ultimate mollusks. 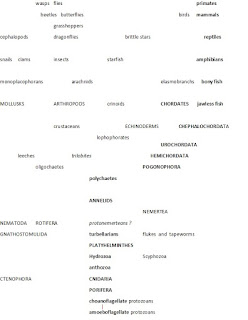 The boldface names in the above diagram represent groups in the direct ancestral line to primates.  All animals with a eucoelomate body cavity are included in the annelids and those above them in he diagram.  Phylum names are in all capital letters.  Polychaetes are probably the ancestral annelids for other annelids (oligochaetes and their descendants the leeches), mollusks, and arthropods, as well as the pogonophorans.  Echinoderms and lophophorates were probably each derived from ancestors intermediate between polychaetes and hemichordates; echinoderms perhaps being farther along the line to chordates in their origin.

The various other groups are not all fairly treated in showing how advanced they are in an evolutionary sense.  Their position is generally more an estimate of the antiquity of their origin.

OLDER VERSIONS OF THE TREE OF LIFE

A.  Prior to the erroneous Lophotrochozoa and Ecdysozoa proposals the "Tree of Life" would have looked much like the version presented above with the following evident.
1. a separate origin of the deutrostomes from much earlier connecting the Hemichordates via unknown intermediates to the platyhelminthes.
2. a consequence is the assumption of a separate origin of coelom and blood vascular system of deuterostomes and advanced protostomes.
3. inexplicable cellular, histological, and moleular similarities in advanced protostomes and deuterostomes.

B.  The Lophotrochoza error may some value as an assessment of lophophorate invertebrates but is not much use as showing relationships to vertebrates and some other phyla.

C.  The Ecdysozoa error is made worthless by trying to make nematodes an important part of the evolutionary history of other some other phyla.  Nematodes, as partially indicated in the diagram above, are probably part of an aschelminth group derived from turbellarian flatworms miniaturized by selection for adaptation for life in the interstices of marine, then freshwater and terrestrial sediments.  The extreme specialization of nematodes did not provide a good base for selection of new groups.  The superficial resemblance of their outer covering with the exoskeleton of arthropods is misleading.  Surprisingly or fortunately, they did not make reptiles part of the group for shedding their skin.  The post of May 31, 2013 should make it evident why the molecular data they used as a basis for Ecdysozoa is worthless.

D.  Other versions of the "tree of life" based on symmetry and other features such as segmentation are not in vogue today, although the data used for them may have application in limited portions of "the tree of life".  The antiquity of brachiopods and bryozoans as well as considerable differences in the lophophores would seem to argue for separate origins, perhaps from somewhere along the polychaete to pogonophora line.

E.  The ancient annelid theory (over 100 years old) can be tweaked by insertion of the pogonophora to explain several things as shown elsewhere in the blog and indicated by the above diagram.
1. How the pogonophora turned an annelid arrangement of systems in to the chordate pattern.
2. How the anterior nervous system could fuse into a brain without an esophagus penetrating it.
3. How the drastic embryological changes of spiral to radial cleavage were simply made.
4. How molecular homologies of chordates and advanced protostomes came about.

Disclaimer: All errors, mistakes, and omissions are my own and not the responsibility of Michigan State University, The University of Tasmania, nor Western Michigan University, nor the U. S. Fulbright Agency; although their assistance was valuable enabling me to make them.  jge

Posted by Evolution Insights at 1:06 PM No comments:

REORGANIZING THE TREE OF LIFE


The major line of animal evolution, known as deuterostomes and including chordates, hemichordates, and echinoderms, needs  to be recognized as having its origin in the early annelid worms via a group of polychaetes now called pogonophorans.  This recognizes the longer evolutionary history of protostomes.  It also sets aside changes made by the proposals of Lophotrochozoa and Ecdysozoa as significant groups of animals; the post of May 31, 2013 explains why they should be dismissed.

[Engemann's] Modification of the Annelid Theory of Chordate Origin

If you have read the recent posts of this blog, starting with SCIENCE PREJUDICE on March 17, 2016, you will understand why I didn’t say “The Creator’s Use of Annelids to Make Humans”.  My data driven conclusions leading to understanding of the evolutionary sequence of events involved do not discredit God by presenting it as a scientifically credible theory.  That is especially true because the multiple lines of evidence were unlikely to have been discovered by my feeble efforts.  I say the same thing about Darwin’s work on developing the Theory of Natural Selection underpinning our understanding of evolution.  I hope I will not withdraw recognition of the Creator’s role as Darwin may have done.  Maybe I should just say “Modified Annelid Theory of Chordate Origin”.

The lines of evidence

First, the observation of inverted systems, noted for annelids as compared to chordates, was responsible for the original proposal of annelid origin over a century ago.

Second, observations that evolution can occur in developmental stages independent of adult features.  This has been known for a long time without perception of its significance.

Third, evolutionary rates at the abyssal depths of the ocean can be so slow it makes molecular clocks for determining evolutionary rates in different branches of the tree of life almost meaningless.  Some evidence of it being known in 1915 exists*, but who would realize the importance of nothing happening?

Fifth, the Pogonophora, unknown at the time of the original annelid theory, embed the major evidence of intermediate linking features.

Where is the evidence?

Second, this fact of some independent evolution of embryonic features is generally accepted since the “Biogenetic Law” was discredited.  I was impressed by the existence of an egg appendage (post of June 5, 2014) not found on more primitive isopods (post of June 6, 2014) illustrating the concept.

Third, factors responsible for the slow rate have accumulated but have not been linked with the remarkable longevity I have shown must exist, beginning with the evidence the pogonophorans present (Posted on October 24, 2015) discussed in the post of Jun 9, 2014 and illustrated in the post of June 13, 2014.

Fourth, a number of research reports have demonstrated the slowing of metabolic rates with depth in the ocean.  Some references are given in the post of June 22, 2013.  When data is limited some have assumed the ages of organisms fell at the lower end of the predicted range of error.  Isopod egg features noted in other posts apply to understanding the cleavage change (protostome to deuterostome type via pogonophorans) due to reduced egg membrane constriction as a possible selective force.

Fifth, the pogonophorans show a number of features intermediate between annelids and chordates noted in some of the posts referenced above and in the post of October 24, 2015.  Their importance is made clearer by their critical role in life surviving extinction events as discussed in my post on May 11, 2013.

The tree of life, revised


A simple correction for the tree of life is to leave the entire protostome line intact (from the version before the Lophotrochozoa/Ecdysozoa errors) and graft the deuterostome (or chordate) line on to the Pogonophora/Polychaeta basal group of the Annelida.  Echinoderms and perhaps some lophophorates may have ancestry among other pogonophorans than those leading to the chordate line.
*Brooks, William Keith.  1915.  The Foundations of Biology.  Columbia Univ. Press, New York.  339 pp.  He comments on - the unchanging nature of Lingula (page 219), and p. 217 “the diversity of the Lower Cambrian fauna and of its intimate relation to the fauna on the bottom of the modern ocean”.