EYE-LINES OF FISH AND BIRDS

Myopic research is used here to refer to faulty research that omits consideration of important factors that give a different answer than the one given by the researchers.  There are many ways by which such failings can be generated.  The research criticized here [Ficken, R. W., P. E. Matthiae, and R. Horwich.  1971.  Eye marks in vertebrates: aids to vision.  Science, 173:936-939.]  happens to involve vision of birds and the evolutionary cause of eye-lines of certain birds.

Their research showed a correlation of eye-lines of certain shore birds with feeding on small mobile prey.  Because the eye-line narrowed from a wide base immediately in front of the eye to a sharp point aimed directly at the tip of the beak, they concluded it was an aide to vision, functioning as an aiming stripe.

I had researched the literature on concealing coloration during the late 1950's when trying to understand a dramatic color pattern of a reef fish. [Engemann, Joseph G.  1960.  The effect of coloration on animals.  Pap. Acad. Sci., Arts, and Letters, 45:9-15.]  I knew that eye-lines are often an integral part of a stripe along the body of many snakes that makes the eye less obvious when it moves.  I also had seen many coral reef fishes that had eye-lines perpendicular to a line drawn from eye to mouth as in several of the fish from Heron Island, Great Barrier Reef, Australia as illustrated below. 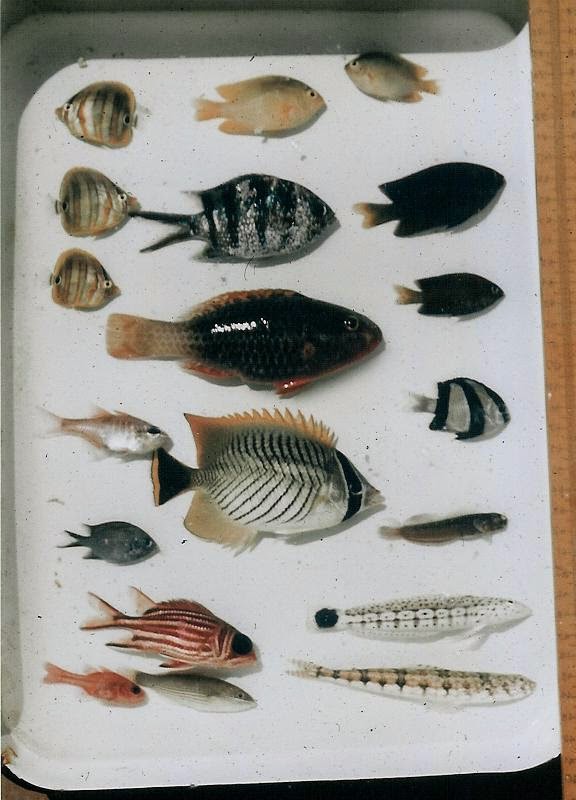 The fourth one down in the middle column shows how the eye can not easily be distinguished when it is part of a dark line.  The dark spot on the tail of the fish below the referenced eye-line is called an ocellus since it mimics an eye and deceives predators that try to aim at or in front of the head so they will catch the fish if it darts away.  The three in the upper left also have the ocellus on the tail as well as a vertical eye-line.  The vertical eye-lines make them blend in with their background when stag-horn corals are present.

After reading the research report of Ficken et al., I did a follow-up study of bird eye-lines and found that the passerine birds that were insect eaters usually had eye-lines, much more so than seed eaters.  It seemed apparent that the insects were more likely to provide food to the bird if they could not see the dark eye approaching as easily.  Thus the selective force was not so much a vision aid as a concealment aid.

Multiple causes can interact in the selective force directing evolution of biological features.  Multiple causes should be considered by researchers in all fields when it is appropriate.

Broad experience is helpful in making one check all the angles pertaining to a research project.  The focused research utilizing computerized internet searches should be supplemented with broader reading in varied research fields.  Cross-application of concepts is more apt to result from such an approach.  Preparation in graduate training should not be limited to the research project as many of my peers were wont to do when they avoided seminars on other topics.

The evolutionary concept of natural selection and/or survival of the fittest has broad application potential beyond biology.  Evolutionary change is likely to produce a more successful society than revolutionary change,  Can that occur if extreme views are contesting for control?

Email ThisBlogThis!Share to TwitterShare to FacebookShare to Pinterest
Labels: comprehensive view needed for research, eye-lines of fish and birds, myopic research and preparation

Intelligence is more likely to be thought of as residing in the left brain, and with language and linear thinking, such as dominates in mathematics, is processed in the non-visual part of the cerebral cortex.  Conversely, creativity seems to reside in the right brain where spatial, visual, and global thinking is processed.  The highest functional state of both intelligence and creativity occurs when the opposite sides are compatibly working on the same project.  Sometimes that may require a highly disproportionate amount of work for a particular side.

Big brains are correlated with big bodies, but the correlation is not 100%.  Small brains can be associated with remarkably complex behavior as anyone who has studied ants and other tiny animals may know.  The driving force for the large brain is not behavior, but seems to be the need for large brain capacity to process visual information.  The transfer of the image from the retina to the brain uses fibers that covey information as while keeping a spatially correct flow of the visual signals. 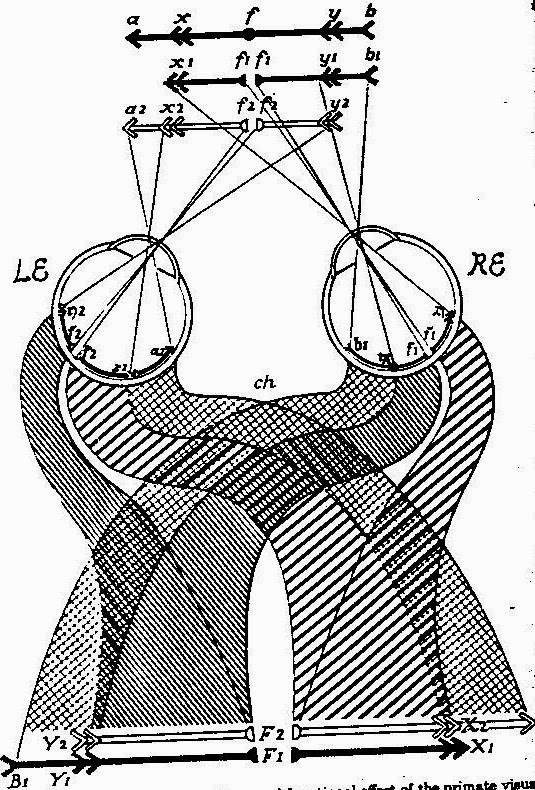 The lens of the eye focuses the corresponding image of the arrow on the retina in reverse (as shown and inverted as not shown).  The optic nerve portions shown partially cross-over for processing on the opposite side of the visual cortex in the brain.  The extreme outer parts of the object form the inner part of the retinal image that goes to the outer part of the visual cortex and is not duplicated as are the inner parts of the object image.  The figure above of Cajal, 1899 can be found in Polyak, 1957.  [Polyak, S.  1957.  The Vertebrate Visual System.  Univ. of Chicago Press, Chicago.  1390 pp.  Pages 781-791 discuss crossing over in the visual system with several diagrams from S. Ramon y Cajal, 1899.]

If your eyes are focused on an edible morsel, the visual image involves many sensory nerve fibers.  When the brain makes the decision to pick up the morsel, the complex movements require many fewer motor nerve fibers for the coordinated action of muscles to make the fingers pick it up.

Although the growth of the visual cortex to accompany better eyes may have been the major selective force for evolution of larger brains, the enlargement of all of the cerebral cortex was beneficial so there was less selective force for keeping the non-visual part small.

WHY I STARTED THINKING ABOUT THIS TOPIC

After twenty years of teaching primarily invertebrate and aquatic biology type courses, about the year 1980, I was called upon to present the zoology portion of the introductory course sequence.  As I was preparing to present a lecture on the brain and nervous system my curiosity about the evolution of things made me want to explain why damage to the left side of the motor region of the brain is reflected in paralysis of related muscles of the right side of the body.  It was apparent the cerebral processing of vision kept the related motor processing on the same side for greater efficiency and the the crossing over to the opposite side for motor nerves occurred further down the brain stem.

Studies of paired molluscan nerves with right and left tracts corresponding to the right and left portion of our spinal cord had been shown to have association neurons in successive ganglia that could transfer information around a break in one half to bypass the break.

The symmetry of vision and its processing in the brain is most efficiently accomplished by the crossing over of the optic nerve fibers going from eye to brain.  There is no such need for symmetry in the brain when it comes to language or linear thinking in the brain, nor is there such a need for global thinking or other non-linear aspects of thought.  So an area of the brain thinking about something does not need a duplicate but reversed thought on the other side.

Many, if not most, thoughts do not depend on coordination of left and right brain.  Thus the one who is concentrating on a visual concept may have difficulty finding the right words to express it.  And the one eloquent and efficient in linear thinking may have difficulty understanding or expressing the spatially significant part.  Fortunately, most things have a bit of both types of thinking involved so the brain gets training that can make intelligence or creativity more evident.

IS THERE A SPIRITUAL PART OF THE BRAIN?

Most linear thinking has a spatial component, and spatial things have verbal and  mathematical components.  But God and spiritual things are not so simply analyzed.  No physical parts but infinite power, extent and grandeur are hard to grasp mentally and impossible to grasp physically.  So maybe that indicates a spiritual part to us that makes us capable of such transcendent thoughts?

Posted by Evolution Insights at 8:04 PM No comments: