The pogonophora to hemichordate transition is the most difficult step to see because pogonophorans are most easily seen as specialized polychaete annelids; and hemichordates are generally accepted as being in the chordate line.  So the big step from the first (the protostome part of the lineage) to the last (the deuterostome part of the lineage) faces the greatest difficulty in seeing for those not familiar with what I have tried to show in earlier posts about this topic.

An obstacle is the residue left from past objections when the annelid theory was thought to be discredited by embryological and molecular evidence.  Why those objections are irrelevant has been treated in earlier posts.

SOME GRAPHIC EVIDENCE OF THE MIDDLE STEP 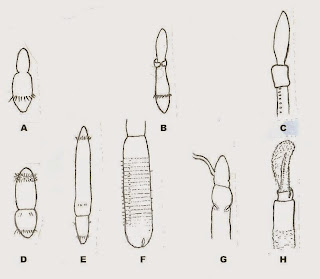 A, B, and C illustrate the progression of stages from early larva to adult anterior of the hemichordate, Saccoglossus.
D, E, and G illustrate the progression of comparable stages of the pogonophoran, Siboglinum.
F illustrates the segmented posterior portion of an adult Siboglinum, and G- its anterior.
H illustrates the anterior of a giant pogonophoran from a thermal vent community.  (A, B, and C, after Hyman and others; D, E, F, and G, adapted fromEngemann and Hegner after Webb; H, from a specimen in the U. S. National Museum.)  [Fig. 12-5 in my unpublished 2010 manuscript, Evolution Insights.]

F, above, illustrates the posterior segmentation not reported until done so by Webb [Webb, M.  1964.  The posterior extremity of Siboglinum fiordicum (Pogonophora).  Sarsia, 15:33-36].  Possibly the segmented end of some species lost this region, or an intermediate species did before becoming hemichordates.
G and H show some of the variability of the anteriors of pogonophorans that resemble the anterior of C, a hemichordate.

A and D are not as precisely alike as one might like.  But this was near the evolutionary step where the early embryology was changing drastically from protostome to deuterostome embryology.

REFERENCES to many of the research articles influential in helping me see the protostome-deuterostome connection, especially the molecular evidence showing the error of current studies were posted in

which you can get to by using the Blog Archive at the right and clicking on the 2014 November arrows.  Or send the address above to a friend you think might find it interesting.  Most of the references are annotated with my comments to myself or quotations from the article.

Posted by Evolution Insights at 7:09 PM