Medical research at the Dr. Homer Stryker Medical School of Western Michigan University and at its two collaborating teaching hospitals of Borgess Health and Bronson Healthcare will benefit from a two million dollar bequest given by Martha Parfet's estate.  She is a granddaughter of the founder of the Upjohn Company, Dr. W. E. Upjohn.  Kalamazoo has benefited greatly by the generosity of numerous relatives and friends of both of the doctor’s families.

Clinical research will benefit from the bequest, as well as basic research using tissue culture and cells and animals that share functions in ways more accessible than in human subjects.  Such non-clinical studies can speed, reduce cost, and sometimes simplify the discovery of things beneficial in modern medicine.

BACTERIA share many biochemical features of all more advanced organisms.  In particular, they contributed greatly to understanding DNA related details.  Their beneficial roles as well as the diseases some caused will encourage continued searches for new antibiotics when resistance to old ones develop.

The bacteria of today and ourselves share some of our biochemical processes as a result of our common ancestry over two billion years in the past.  As organisms share more recent common ancestry with us, they are expected to share more features with us although they may lose some and gain others unique to themselves and their descendants. 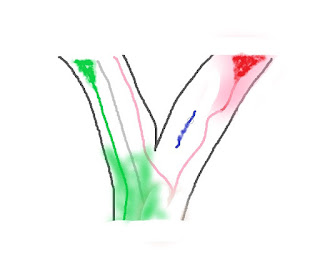 The figure above is just to suggest what happens many times during the ancestral history of organisms.  There is no precision to it, but the internal lines show continuity in one or both branches (multiple branches may also occur at the same time) and it may take very many generations that may include the beginning or end of new or old features.  The short blue line on the right branch could be repeated in many times and places for numerous other extinct groups from the past.

INVERTEBRATE animals range from protozoans and simple sponges to complex ones, some of which, especially the giant squid, reach large size.   Invertebrates began leaving an abundant fossil record of great diversity about 500 million years ago.

VERTEBRATE animals of today share a common ancestry with echinoderms, perhaps lophophorate animals, and a few degenerate annelid-like worms that gave rise to early pre-vertebrate chordates that diverged from the other advanced invertebrates (annelids, mollusks, and arthropods) near the beginning of the Cambrian.  The following figure is intended to represent an educated guess of some of the ancestral tree major relationships. 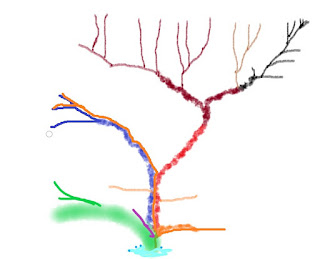 The tree of life is to graphically show the central role of the annelids leading to the two main branches of coelomate animals (protostomes left, deuterostomes right with the pogonophorans linking them to the other line) with the vertebrates upper right and the arthropods, upper left.  Plants in green are are lower left, and nematodes are on the blue and red left middle main branch.

Why are organisms important in medical research?

1.      Shared system features of physiology, structure, and biochemistry are likely to be most similar when the distances (or perhaps generations) from one group to another along the branches of the ancestral tree of life are shortest (or fewer).

2.      Some organisms have feature comparable in some ways to ours, but in a more accessible or larger form.  For example, the transmission of nerve impulses was made understandable by studying the giant nerve fibers of squids.  Fruit-fly larvae have giant chromosomes that led to some genetic discoveries.

3.      Basic toxicity studies of proposed drugs can be on simple organisms after or in place of initial tissue culture or other studies.  Such tests may be much less costly in time and/or money.

Where should medical research start?

1.      Most likely it will start as you work with a senior medical researcher using you as an assistant performing work for which you are trained.

2.      A first step that should become a habit is studying the research literature in the library, on-line, in appropriate journals, and attending meetings of your research group.  Especially, attending related research being reported at local, state, or national conferences.  Often, verbal presentations of research include clues of value to apply in your research.

How is evolution important in medical research?

It may not always be important to you if you are a specialist is some aspect of a research project.  If you are planning research it may help you select organisms for non-human aspects of research such as in the first list above.  Keep abreast of new developments, even the most unlikely organisms may teach us things of value.

Although animals greatly separated from us on the tree of life may share some identical features with us, they are expected to have greater differences than ones that are more recently separated.  The pogonophorans clue us in on where differences in biology are more likely to be greater in some instances and less in others.

The pogonophorans are a bottleneck where they branch off from the annelids, losing the spiral cleavage of the three big invertebrate groups - the annelids, mollusks, and arthropods – as well as loss of much of the gastrointestinal system and skeletal functions.   In spite of the latter, cartilage of the squid seems indistinguishable from vertebrate cartilage with casual microscopic examination.

Many biochemical features survived the pogonophoran link bottleneck.  Hemoglobin is the blood pigment of vertebrates as well as some invertebrates across the pogonophoran divide.  Aspects of delivery of pituitary hormones in our endocrine system show remarkable similarities in mammals and arthropods.  Peculiar intercalated disks of our heart muscle are also seen in some mollusks.

If you find commonalities of another organism and humans, don’t use the just stated facts as reason to change your experimental animals.  But consider the discussion as an aide to picking new ones if evidence warrants it.  Selective evidence was used to put nematode worms in a major cluster with arthropods when most evidence indicated otherwise.  The post -

- and the post on May 31, 2013 indicate otherwise, Ecdysozoa is not a valid related group.  Both posts provide references supporting that statement.  I write this with hope that it may be of some benefit to the researchers the grant will fund in the university from which, twenty-two years ago, I retired.