Currents of major impact on the ocean are profoundly influenced by density differences due to salinity and temperature differences.  The heavier water sinks and the lighter water rises.  Surface currents can be wind driven.  Gravity and inertia impact currents.  At the interface of moving currents, or a current and still water, turbulence and mixing can be induced.

Pure water is most dense at about four degrees centigrade.  So progressively warmer water is usual found from near the bottom to near the surface.  Salt concentration of the water may make the temperature stratification vary in other ways.  For example, Mediterranean Sea water entering the Atlantic Ocean near the Straights of Gibraltar sometimes goes to an intermediate depth based on density level of the ocean of the same density, but with different temperature and salinity.

Most of us are familiar with the affect of the Gulf Stream on climate in Europe, by its movement north along the western Atlantic that veers east and provides milder climates to northern Europe.  A similar current affects climates in the north Pacific.  While such currents catch our attention, one of greater consequence has had a profound affect on evolution as it has no doubt persisted and survived assaults by asteroids, volcanic disruptions, continental drift, and variations in solar radiation.  It involves a cycle of circulation that takes ten thousand or more years to complete - from icy polar water settling to abyssal depths of temperate, sub-tropical, and tropical parts of the ocean where it slowly warms and rises until it ultimately mixes with warmer surface waters and completes the cycle by returning to polar regions via currents and evaporation and precipitation.  A pause in polar ice caps can exceed the ten thousand plus year trip from abyss to sea surface. 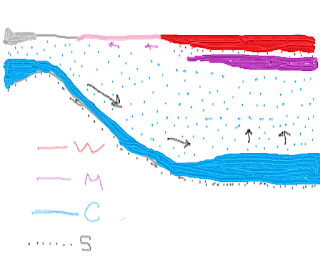 The visual above is not to scale but indicates the North Atlantic pattern of circulation from polar regions on the left to tropical regions on the right.  Similar but variable profiles would be found in the North Pacific and Southern Ocean region of Atlantic, Pacific, and Indian Oceans.  The flows would diminish and seem to disappear as they meet under tropical waters.

S represents the ocean floor or sediment with a sill regulating flow from (the sometimes ice covered) Arctic Ocean water.  A rise in sea level, or a subsidence of the sill can allow a greater volume of flow to the abyss of the Atlantic.

C represents the cold salt water of high density that sinks to the depths of the ocean of such great volume that the warming water rises slowly, taking ten thousand or more years to mix with the warmer and less dense overlying water.

W, the warm water is where oxygen is replaced by photosynthesis as well as by diffusion from the atmosphere.

The thickness of the thermocline is greatly affected by wave action.  Calm seas may have a thermocline within a hundred meters of the surface.  Hurricanes and storms can produce turbulence to make the thermocline much deeper and provide a thicker zone of warm water and heat storage that may prolong or increase subsequent storms.

The first major oceanographic expedition occurred from late 1873 to early 1876.  One of its many accomplishments was measuring depths, temperatures, and salinity of the oceans.  I had examined part of one of the fifty some volumes of its researches published later that century while I was teaching a marine biology class about a hundred years after the voyage.  I don't know how many years it took me to realize that the temperature profile that I have crudely illustrated above meant that the presence of oxygen and long residence time of the deep water beneath the thermocline meant either extremely low biological activity or very few organisms.

Subsequent oceanographic work has provided more complete coverage of the oceans and greater precision in measurements without changing the basic importance of the early expedition.

Sediment cores show the vast percentage of abyssal sediments accumulate very slowly.  That helped me understand the extreme age of some bottom dwelling animals as indicated by their tubes position in sediments.  The embedding in sediments was inferred from the rarity of finding their posterior ends in dredge samples, absence of tube rings on a posterior branch of the fork of branched tubes, and funnel-like rings on some species with rims oriented toward the anterior end (the exposed tentacle bearing ends giving rise to the common name, beard worms, of the Pogonophora).

The extreme longevity of deep sea animals is part of a circular argument that suggests the slow replacement of the cold deep water of the ocean, which in return, suggests the extreme age of the organisms there.  Fortunately, other evidence is available to augment the invalid circular reasoning.  The most dramatic bit was discovery of unspoiled fruit and sandwich on a lunch recovered from the Alvin submersible research vessel many months after it sank to great depth.  Several studies involving respiratory rates of deep sea organisms show greatly slowed rates compared to comparable organisms of shallow seas.

Some major implications are discussed in numerous past posts.  Two major ones are-
- the error compounded in molecular phylogeny studies (especially establishment of the Ecdysozoa concept), and the unique missing link role that the pogonophorans fulfill.

The permanence of the ocean stratification in tropical through temperate zones has provided stable environments where the extremely slow metabolism resulting from low temperature and immense pressure allowed those that slowly adapted to the abyssal region to survive.  The pogonophorans are one of the most significant, but little known, groups.  Neopilina is an important indicator of molluscan relationships and their annelid ancestry.  Brittle stars are abundant on many areas of the ocean bottom and help us understand the selective pressures giving rise to shallow water relatives.  The coelocanth fish was found at intermediate depths but is a living relative of what is otherwise known from fossils.

Will the enormous area and depth protect marine life there from the assault of a constant flow of debris and chemicals we dump from ships, atmospheric contamination and polluted streams?


Posted by Evolution Insights at 11:27 AM