Konnersreuth is a small Bavarian town and the home of Teresa Neumann.  I visited the farming town of about 1,000 people because I had heard of the stigmatic, Teresa Neumann, from my mother and somehow remembered it while I was stationed in Germany in 1952,  It is amazing that Ed Klem and I could find a bus from near our Grafenwohr maneuvers site to where we got of the bus and walked down the road to Konnersreuth, passing a farm with a team of bullocks. 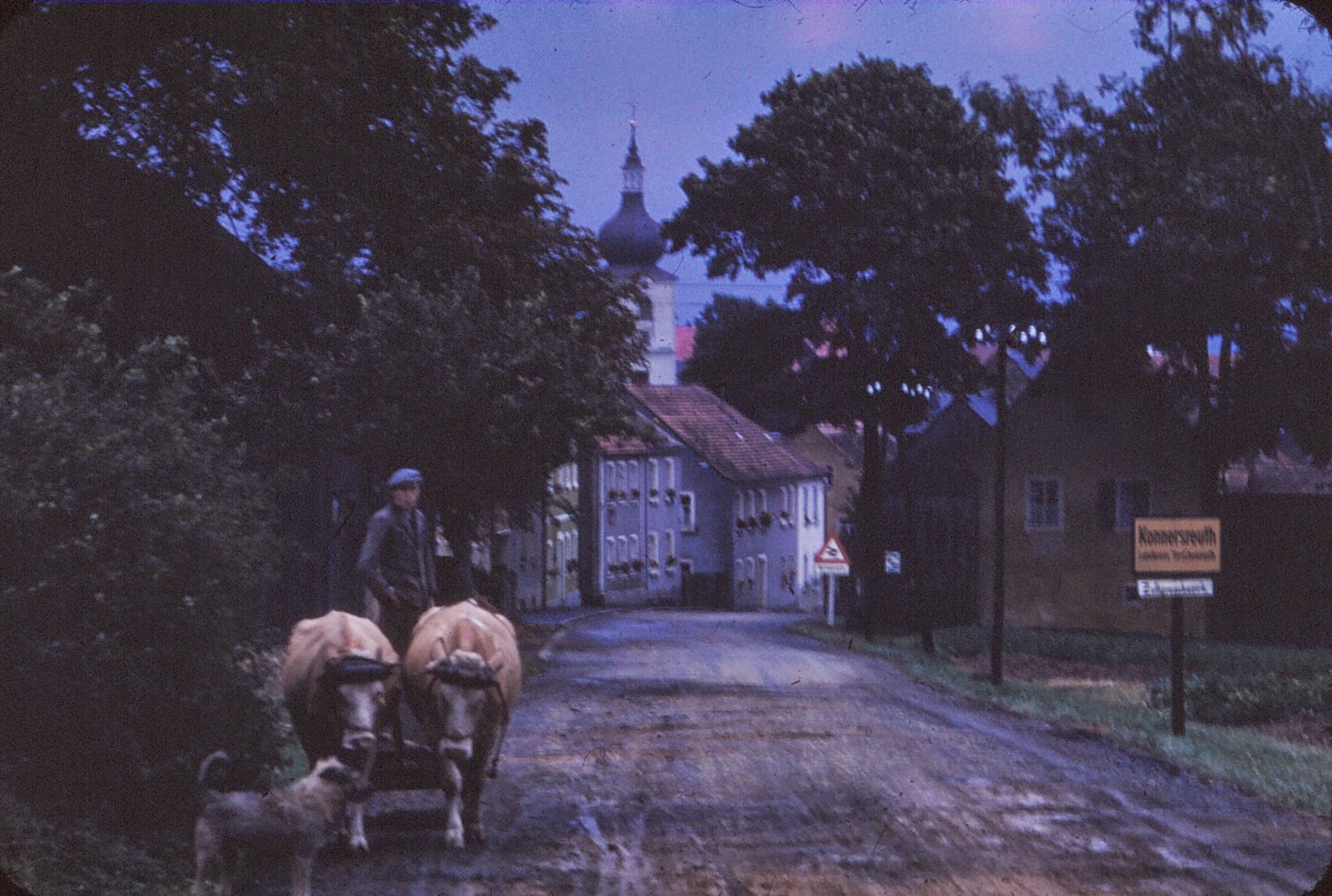 As we entered the town, one of the first houses on the left had a small shrine in the garden next to the house of Teresa Neumann. 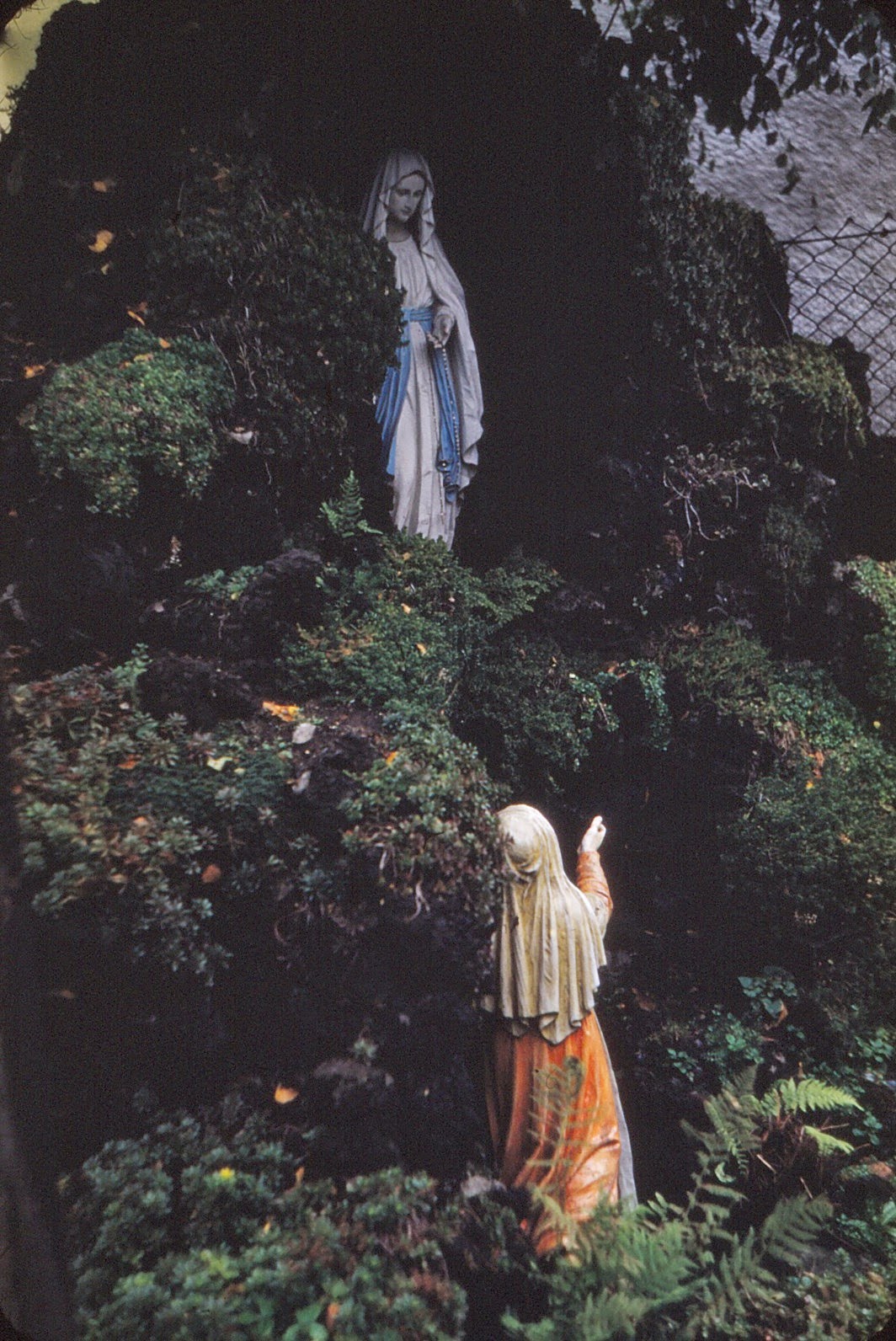 The house was home to the Neumann family and their ten children, Teresa was the oldest and born in 1898.  The streets of town were almost deserted, and Ed and I seemed to be the only tourists.  I don't remember now, 62 years later, if we found a place to have lunch or how we learned that it was Teresa's home. 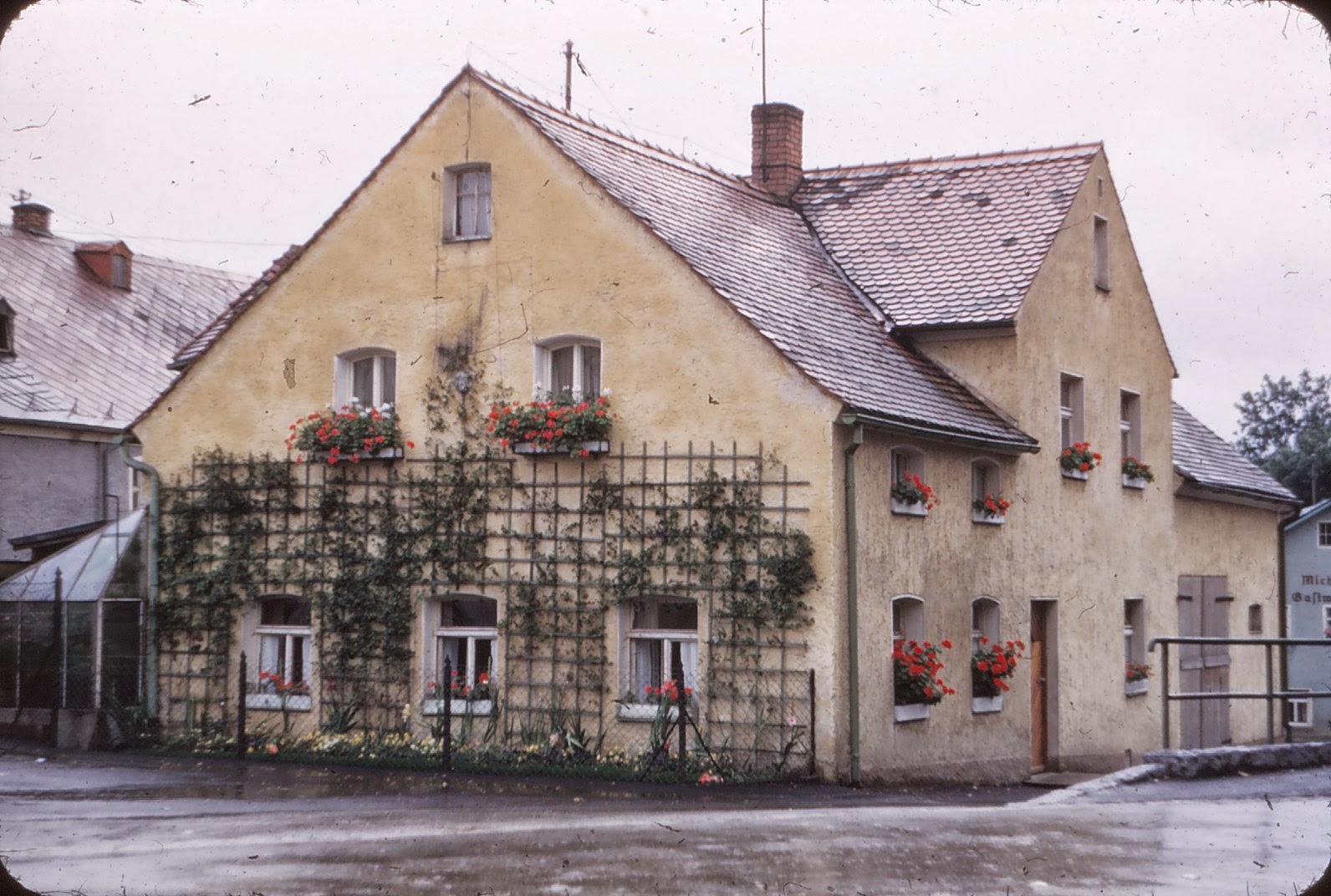 According to an account in The Two Stigmatists PADRE PIO and TERESA NEUMANN  by Charles M. Carty, which I bought in 1959, the Neumanns farmed, but the farming was mostly done by the mother because the father also worked as a tailor to supplement their income.  Teresa also helped with the farm work.  The caption in the book, of a black and white photo of the trellised end of the home, noted that Teresa's bedroom was in the upper level of the home.

Her church, the steeple of which is visible in the first photo, was a short way from the home.  A second picture of two very similar ones was selected because it had someone in it as seen below. 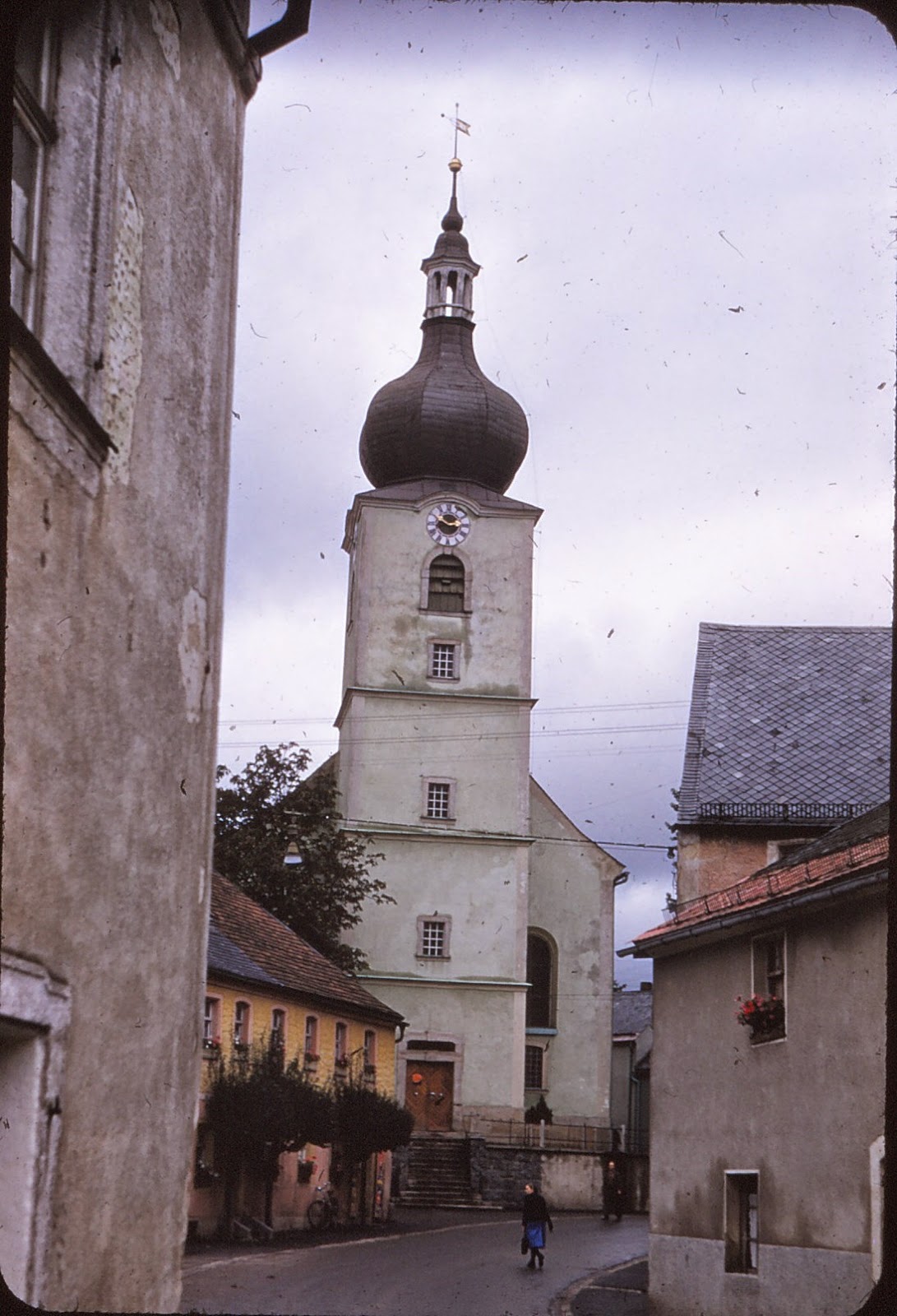 Inside the church, the view toward the main altar shows no one.  But while we were in the church a lady, dressed in predominately black clothes, may have been Teresa Neumann as she was attending to some tasks in the altar end of the church.  I suspect it was her because she was wearing black gloves, perhaps to cover up the stigmata on her hands, or perhaps the church was unheated. 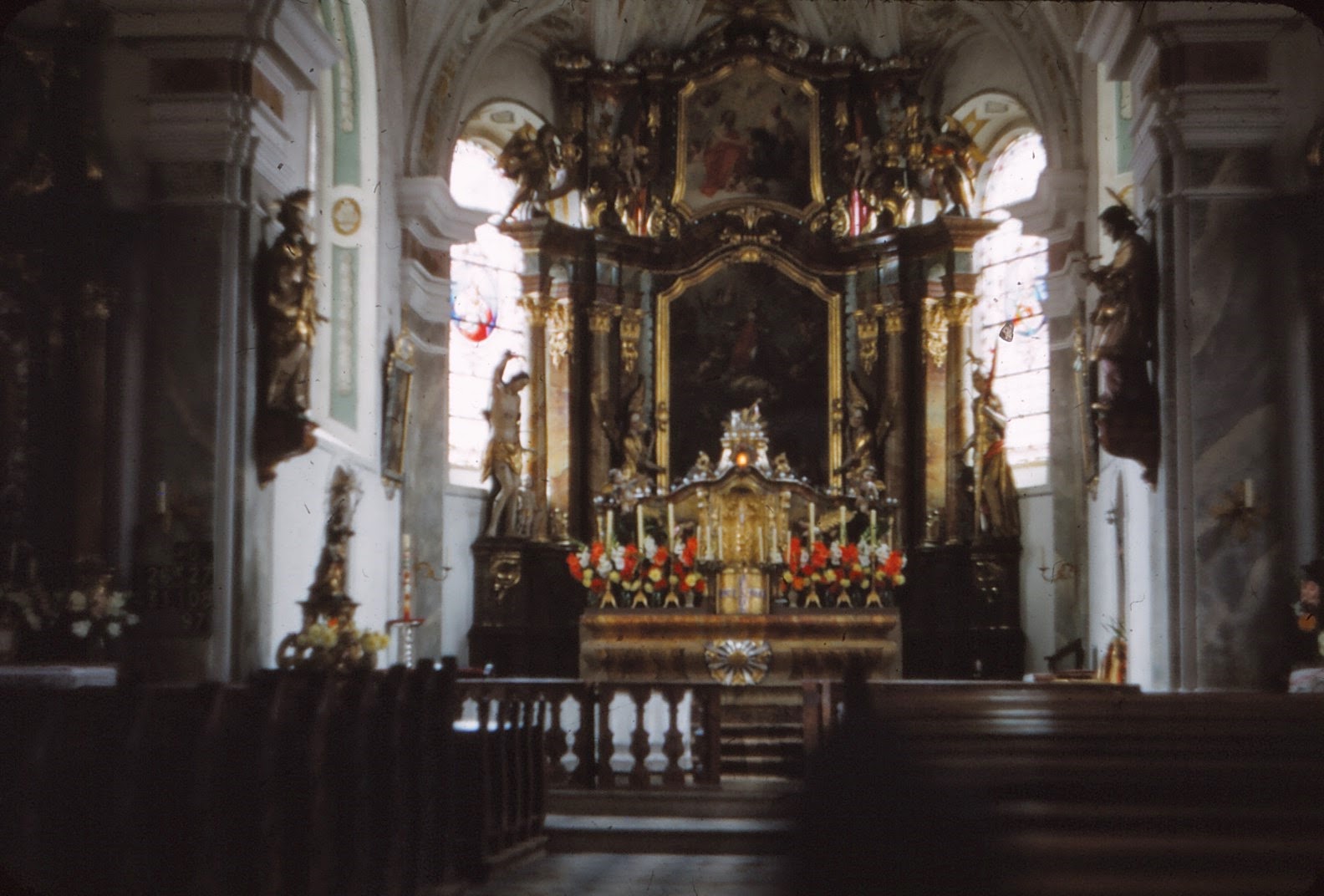 We departed without disturbing her and somehow managed to get back before the bus went back to Regensburg, or wherever it was that we could get transportation back to the Grafenwohr maneuvers area.

Stigmatics are individuals that typically bear a wound on each hand and each foot at points where Christ was impaled with nails to the cross as well as one on the side where the soldier's lance pierced him.  The wounds usually bleed on Fridays and especially so on the Friday commemorating the Crucifixion.  In Teresa Neumann's case, she also had a wound on the shoulder corresponding to the effects Christ had carrying the cross for his crucifixion in addition to numerous smaller ones from a crown of thorns.

Teresa Neumann is reported to have received the stigmata in 1926 shortly after she was miraculously cured from a series of different health problems for the sixth time in three years after praying for St. Teresa of Lisieux's intercession.  Several spiritual gifts usually accompany the stigmata, one most of us would understand is the gift of healing.  One that was intensely investigated was her regaining her weight after losing much blood each Friday but only eating a wafer of eucharistic bread each day and not drinking water for most of the 31 years up to the time of publication of the book mentioned above.

Teresa Neumann died in 1962.  Carty quotes from Konnersreuth Today, (1950) by Frohlich, as Teresa responding to a fundamental question of life about the meaning of suffering with "The voluntary assumption of suffering in the spirit of atonement and expiation is an heroic act of love of God and profits one's neighbor's."