The Beauty of an Ice Storm 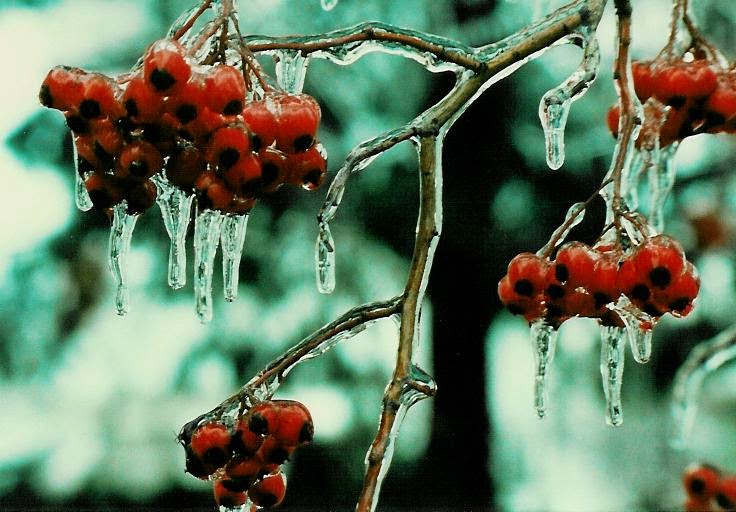 is often not appreciated.

The picture above was taken in January over thirty years ago of fruits on a small tree beside our house.  Before the winter was over the berries were eaten by a flock of birds whose usual food had become snow covered or eaten.

In the spring, well after the ice storm, I looked up and saw slashes of light colored wood on the upper branches of big silver maple trees along the street.  Throughout the city there had been many trees and large limbs broken down by the load of ice the trees bore.  A coating of ice on the tips of upper branches presumably broke off many of the small upper twigs and lightened the load on the big branches so most trees survived.

About a dozen years ago we were in a different house when another ice storm hit.  The most remarkable damage in our yard was a tall pine tree in a neighboring lot broke off and almost reached our house.  I had noticed that the upper part was bending over under the weight of ice and better exposed the branches to more freezing rain and ice accumulation.  During the night the trunk snapped off about ten feet above the ground.

The consequences of such events must have a selective role in the lives of many organisms.  In a forest the occasional large tree falls and leaves an opening for sunlight to enable a new cycle of plant growth near the ground.  The various plants have a role in feeding or hiding animals from small to big.  Such complexities have no doubt been a feature of the environment organisms adapt to over time as they evolve to better compete.  If they don't they join the throng of extinct species preceding them.