It happened in Tasmania

Karyotypes are the representations of the chromosomes of cells typically in one plane with the chromosomes spread out and stained so shape is evident and numbers and sizes can be determined.  Ideally, the numbers and the individual chromosomes can be identified by size and silhouette for comparisons that may be useful in determining relationships. 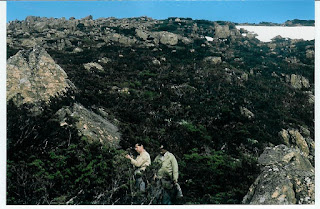 A photo of Ken Burns helping Dr. Rao collect podocarp materials for his karyotype research.  The remains of the glacier that eroded the tarn shelf is visible behind them on a mountain in central Tasmania. 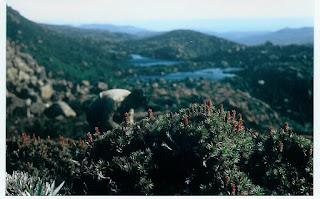 A photo showing Mr. Burns sampling in the region with the tarns (glacial pools) on the shelf behind him. 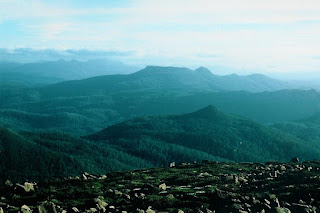 A view from Clemes Tarn on a ridge leading to Mt. Field, Tasmania.  The mountainous region was forested all the way to the ocean at that time in the mid 1950's

Telomeres are repeated terminal groups on the ends of chromosomes.  The early cells in development typically start with the greatest numbers of telomeres.  One from each group is generally removed at each division.  As a result, cells of older individuals have fewer telomeres.

Considering just the number aspect of  karyotypes, change can occur rapidly.  Related groups sometimes differ by having chromosomes with a variable whole number divisible by the haploid number of the group with the fewest chromosomes.

The above comparisons are almost meaningless but may illustrate similar numbers do not assure close relationship, nor do different numbers always indicate less relationship.  A few of the same organisms were included in the table comparing protein coding DNA and random DNA between genes with humans in post 98 [ http://evolutioninsights.blogspot.com/2015/03/evolution-god-100-nature-science-0.html  ] and was first presented in [  http://evolutioninsights.blogspot.com/2015/03/evolution-quiet-pre-cambrian-genes.html ].

Mammals have benefited, versus invertebrates, in speed of evolution by having multiple similar genes where invertebrates have only a single gene per family of genes.  It relaxes the selective pressure to get a change right the first time when a gene mutates.


I am uninformed on the details of karyotypes and telomeres, but use the topic as an excuse to include the three pictures from  Tasmania taken in 1956 or 1957 when I accompanied Dr. Sundar Rao on his trip to tarn shelves on Tasmanian mountains to get tissue samples from primitive plants of the Podocarpaceae for their karyotypes.  My minimal knowledge in the area may give me room to ask some possibly creative questions.

Do the telomeres of pogonophorans from abyssal and slope species show significant differences accompanying longevity differences?

Do karyotypes show similarities that might be expected to be evident in transitions of phyla proposed in some classifications better than other classifications accompanying family trees of phyla?

Chromosomal rearrangements would be expected to exhibit greater change in karyotypes than genotypes in evolutionary transitions.

My thanks to the University of Tasmania for making the above picture taking possible.