Circulatory systems have evolved and transport things throughout the body.  So transportation is the primary function, but the things transported can be oxygen, nutrients, waste products, and molecules serving a variety of functions.  The transport of many of the substances could be accomplished by a fluid filled body cavity, or just cell to cell in very small organisms.

The need for oxygen in active large animals is greater than can be transported by oxygen dissolved in body fluid of large animals.  So respiratory pigments such a hemoglobin allow a much greater supply of oxygen to be transported rapidly. When oxygen is abundant in the just inhaled air in the lungs it will combine with hemoglobin, but when it reaches tissues where it is depleted it is released.   Typically, the depletion is due to metabolism resulting in production of carbon dioxide which is then carried on the return trip to the lungs for release and elimination with exhaled air.

Circulation of blood in animals with heart, arteries, capillaries, and veins is like a bus route.  Some things go round and round on the route.  Others, such a hormones may go round and round until they are bound up by the target organ.  Those control substances included things that stimulated or inhibited processes in the target organs.  Over time delivery of control substances for specific targets selected processes that became the nervous system enabling precision in control.  But longer acting processes where instantaneous response is not important are adequately served by the circulatory systems of organisms.

EVOLUTION OF THE CIRCULATORY SYSTEM

No circulatory system
Many students have had the opportunity to see circulation within cells while observing Amoeba, Paramecium, or plants such as Elodea with  microscopes.  Similar cytoplasmic movement can occur in animals with circulatory systems.  Movement of the organism can provide some functions of a circulatory system by leaving waste behind as areas with more oxygen and food are reached.

Gastrovascular type circulatory function
Animals in the phylum Cnidaria (jellyfish, corals, and related forms) and Platyhelminthes (flatworms) are the major groups with gastrovascular type systems.  The name comes from it being the central digestive cavity which may be branched reaching all the parts of the body and having the capacity to carry on digestion as well as circulation enhanced by body movements and sometimes cilia.

Body cavities as circulatory systems
In the previous types the space between the epidermis covering the body and the organs such as gonads and guts are filled with either mesoglea (jellylike material and few cells) or parenchyma (large water-laden cells) through which materials can diffuse, but where little metabolic work is done.  The simplest body cavity to contain organs is called a pseudocoel because it lacks a lining of epithelial cells as in those with a coelom (as found in all eucoelomate higher phyla).

The importance of the coelom for provision of circulatory function is indicated by small organisms such as the bryozoans.  In the photo below of several polyps (or zooids) of a colonial species, Pectinatella magnifica, the particles in the space between gut and body wall are circulated with the body fluid propelled by patches of ciliated cells on the lining. 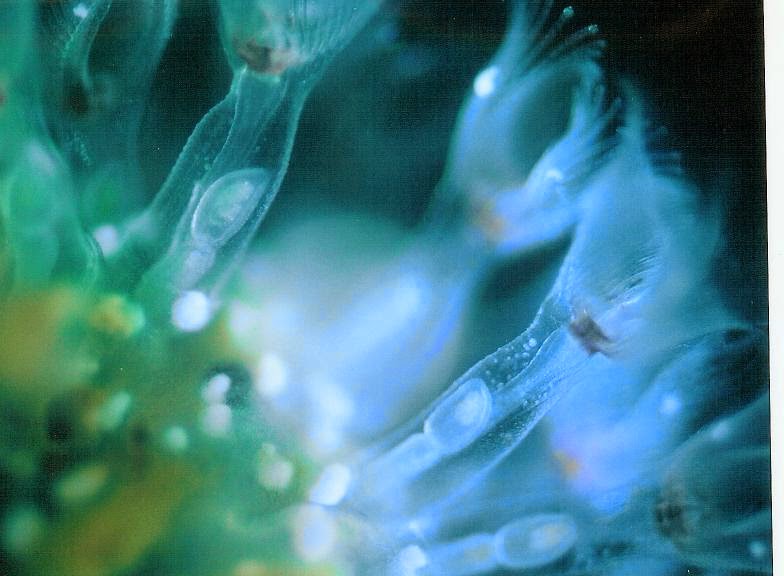 Body fluids of many organisms such as the above also serve a skeletal function of support for the body when fluid is confined within the body and compressed to keep the organism inflated.  The exact evolutionary relationship of the bryozoans is not certain.  They are a very old group that may have no close ancestry to advanced phyla, or they may be derived from more advanced forms due to reduction much as occurred in the pogonophorans.

Blood of vertebrates
Blood cells of vertebrates are often categorized as white blood cells and red blood cells.  Most vertebrates, including fish, amphibians, reptiles, and birds, have large, nucleated, football-shaped red blood cells. Mammals have small red blood cells that are flattened disks (usually characterized as biconcave disks) that lack a nucleus when mature.  Vertebrates have hemoglobin in their red blood cells and thus help keep the viscosity of the blood lower.  The cells, in addition to lowering blood viscosity, may help improve the transfer of materials in the capillaries of organs by making the whole fluid column in the capillary move at the same speed.  The wiping action, in effect, reduces the diffusion distance for materials being exchanged.

[Note  added June 3, 2015: An important part of circulation in vertebrates is thought to be escape of water and smaller solutes, including oxygen, from the arterial end of the capillaries into the interstitial fluid; uptake at the venous end of the capillaries returns much of the fluid, and carbon dioxide; and solutes and fluid that cannot be taken back by the venous end may return to the circulatory system via the lymphatic vessels.  This circulation pattern is driven by higher hydrostatic pressure in the arterial end versus lower pressure in the venous end as well as the higher remaining concentration of larger solute molecules in the venous end.]

Blood particles, called platelets, are important in clot formation that seals off breaks in the blood vessel walls.  White blood cells are of several types important in function of the immune system.  These constituents of blood are formed in marrow found inside bones of the body.