Survival is affected by many different things.  This post will discuss the impact of length, surface, and volume on natural selection.  Such simple physical components of an organism can have great affect on the organisms relationship to its environment as well as to physiological and mechanical functions.  The fourth dimension, time, is certainly an important component of natural selection but it is not discussed in this post.

THE LINEAR DIMENSION AND SURFACES

If an animal only grows in one dimension, length, its mass is directly proportional to its length.  Some subterranean animals find this a way to get bigger without required larger dimensions of tunnels they occupy.  For attached, or sessile, animals increased length gives them access to food items farther away from an area proportional to the square of the distance.  Surface area of the organism, ignoring the factor of tapering ends usually involved, increases in proportion to the product of length and width or circumference.  For a flat, encrusting type organism, that doubles in length and width of surface dimensions, the larger form has four times the surface area. 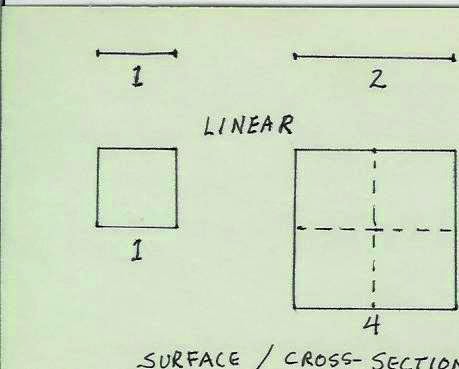 Of course, organisms all have a third dimension, depth or the dimension at right angles to both length and width.  The product of length, width, and depth gives the volume or mass of the organism.  Organisms with complex shapes can have their volume calculated from the sum of volumes of all their parts.  A simpler measure can be equivalent to the volume of water displaced when it is immersed; its weight is also a good approximation, if it lacks mineralized parts each gram equals approximately one cubic centimeter.  The animal that doubles each dimension has volume or mass increased from one unit volume to eight units of volume as illustrated below. 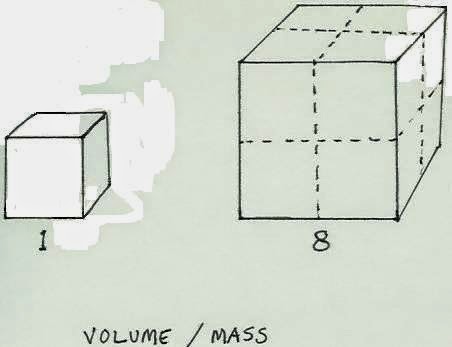 THE PRACTICAL CONSEQUENCES OF INCREASED SIZE

Rates of delivery of materials to and within organisms varies greatly due to variations in permeability of membranes, circulation of protoplasm within cells, binding with other molecules, circulatory systems, surface area modifications, and additional chemical and physical factors.

Dinosaurs were thought to be near the maximum size for a terrestrial organism because the mass increased with the cube of the linear dimensional increase whereas the strength of the skeletal support in leg bones only increased with the square of the diameters of the bone.  If they grew bigger they would need bones too big to be contained within the organism.  Likewise muscles to move the mass increased in strength proportional to their cross-sectional area and reached the limit of practical size; muscle and bone would be unable to keep up in needed strength for greater size.

Birds, and presumably some dinosaurs, have hollow leg bones that have greater strength with less increase in weight.

The increased size of most advanced animals made the ratio of length to surface area of organs exchanging nutrients, oxygen/carbon-dioxide, and heat from body surfaces, lungs, and gut have survival improved when gills, pouches, folds, and other mechanisms increased the surface without increasing overall size.  An example is the longitudinal fold called the typhlosole in the gut of the earth worm.  The Tasmanian isopod also had a typhlosole.  However, the worm has it in a dorsal position and it has more internal structure.  The isopod has it in ventral position and it is simple in structure.  In the first picture below, the typhlosole is projects up from the bottom of the tubular gut- which has some food included.

Such modifications enabled animals descending from flatworms achieve thickness and complexity.  Flatworms are limited in thickness in part by the inability of sufficient oxygen to diffuse to active tissue more than a few cells away from the surface.

To enable many of the advances to take place, a circulatory system was necessary to effectively take out most of the need for diffusion over the distance from surface of uptake to surface of release of transported nutrients, wastes, and oxygen.  Hemoglobin and other respiratory pigments enabled greater quantities of oxygen to be transported because the combined form of oxyhemoglobin did not contribute to oxygen saturation of blood fluid.

The dorsal blood vessel and heart are shown above the gut in the two pictures below.  In the first picture arteries, labeled A are going off to each side; in the second picture the heart shows an ostium (O), the valve through which blood enters the heart from the hemocoel (the blood filled body cavity that serves the role of capillaries and veins in arthropods). 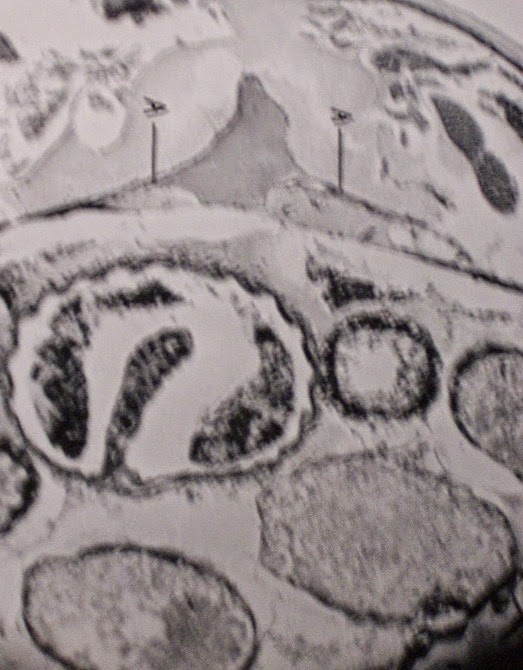 The arteries carry blood to the thin-walled pleopods, abdominal leaf-like appendages with thin walls where oxygen and carbon dioxide are exchanged with the surrounding water.  The blood then carries oxygen to the various tissues of the body on the way back to the heart.  Along the way it picks up nutrients absorbed by the gut, eventually entering the heart through the ostium.  The blood bathing the internal spaces does the job of capillary networks in higher organisms. 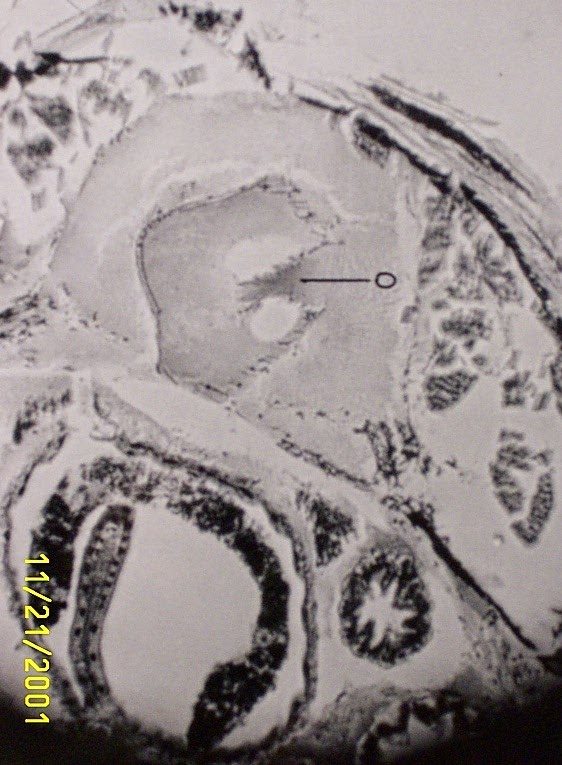 The gut of the Tasmanian isopod has very large cells lining it.  The photo below is an enlargement of the gut or intestinal lining (I) where it meets the rectum (R) lined with small cells. 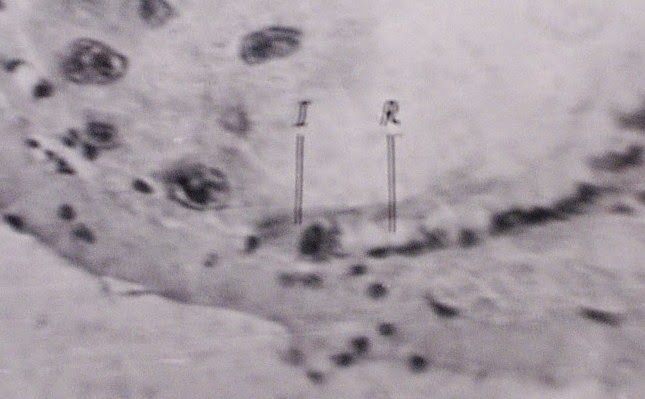 Larger organism have greater complexity and require proportionally larger muscles and capillary networks as a result to insure adequate circulation.  Such things allow them to overcome the decreasing rate of provision of needed substances and removal of wastes found with diffusion based circulation that is adequate for microorganisms.

Posted by Evolution Insights at 11:29 AM