EGG APPENDAGES OF THE MICHIGAN ISOPOD

Baker Woodlot on the campus of Michigan State University in East Lansing, Michigan contained several vernal pools.  One by the road on the western boundary of the woodlot was the location where the population of the isopod, Asellus communis, studied for comparison was found.  As compared to the elevation of the pools on Mount Wellington of over 4,000 feet, the elevation is less than 800 feet. 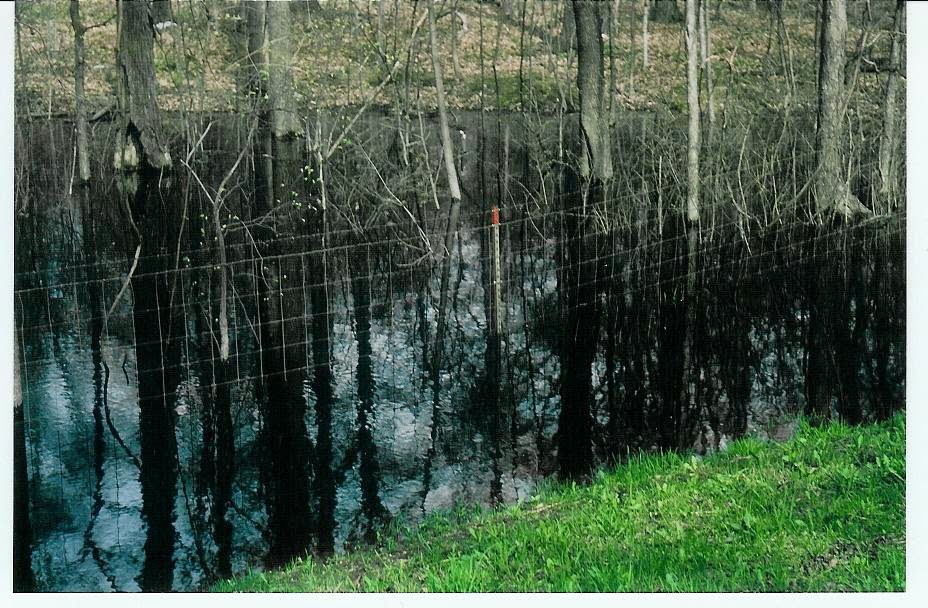 The pools were almost equidistant north or south from the equator, but in opposite hemispheres.  The temperature extremes were not measured but the mild temperatures of Hobart at sea level were replaced a few miles away by colder temperatures on Mount Wellington, especially during the winter.  Trees provided an abundant leaf-fall in the woodlot.  Input of similar nutrients were much more limited on the mountain.  Vertebrate predators such as turtles, fish, salamanders, and frogs were not found on the mountain and are relatively few in number in Tasmania.  More species of invertebrates were found in the Michigan pool. 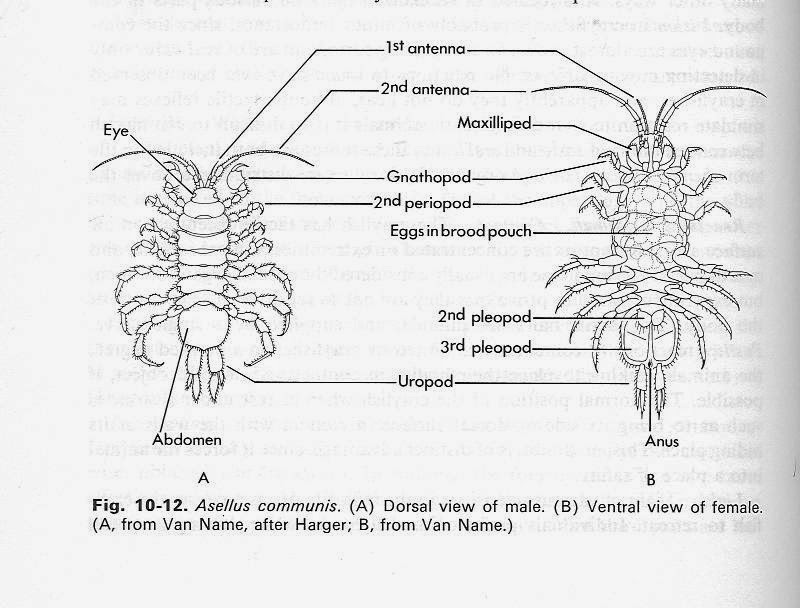 Both species had females with eggs in brood pouches during the breeding season as shown in the figure of Asellus above.  The difference between the 2nd and 3rd pleopod sizes of the Michigan isopods are shown in the drawing; pleopod 3 covers 4 and 5 on the underside of the very short abdomen (in above figure A).

The photo A below shows two eggs.  All Asellus eggs develop pairs of egg appendages; one, B,  is enlarged for clarity. 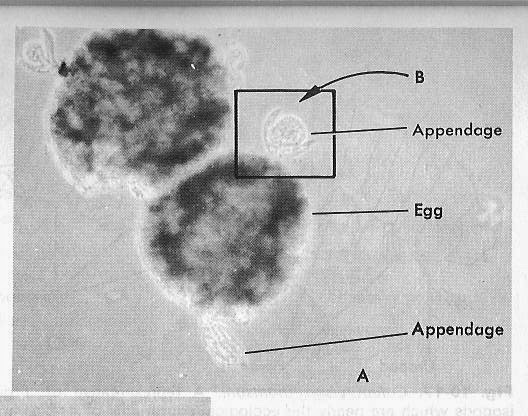 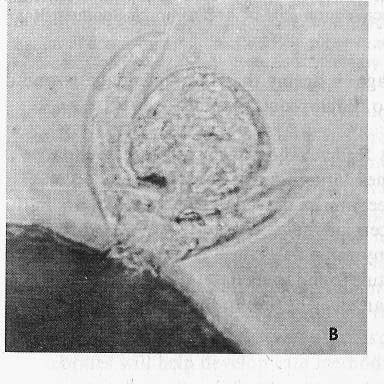 The cells forming the tissue of the appendage have characteristics much like the leaf-like branches of the pleopods under the outer protective branch of the 3rd illustrated.  The delicate cellular structure indicated by B and its similarity to the respiratory appendages suggests the appendage has a respiratory function; the same features could be useful in eliminating ammonia and perhaps other water soluble wastes.  It has been suggested that they could be useful for uptake of nutrients from the mother's brood pouch.  That does not seem likely since water from the pool bathes the eggs, and the eggs have a plentiful store of nutrients in the darker yolk filling the egg. 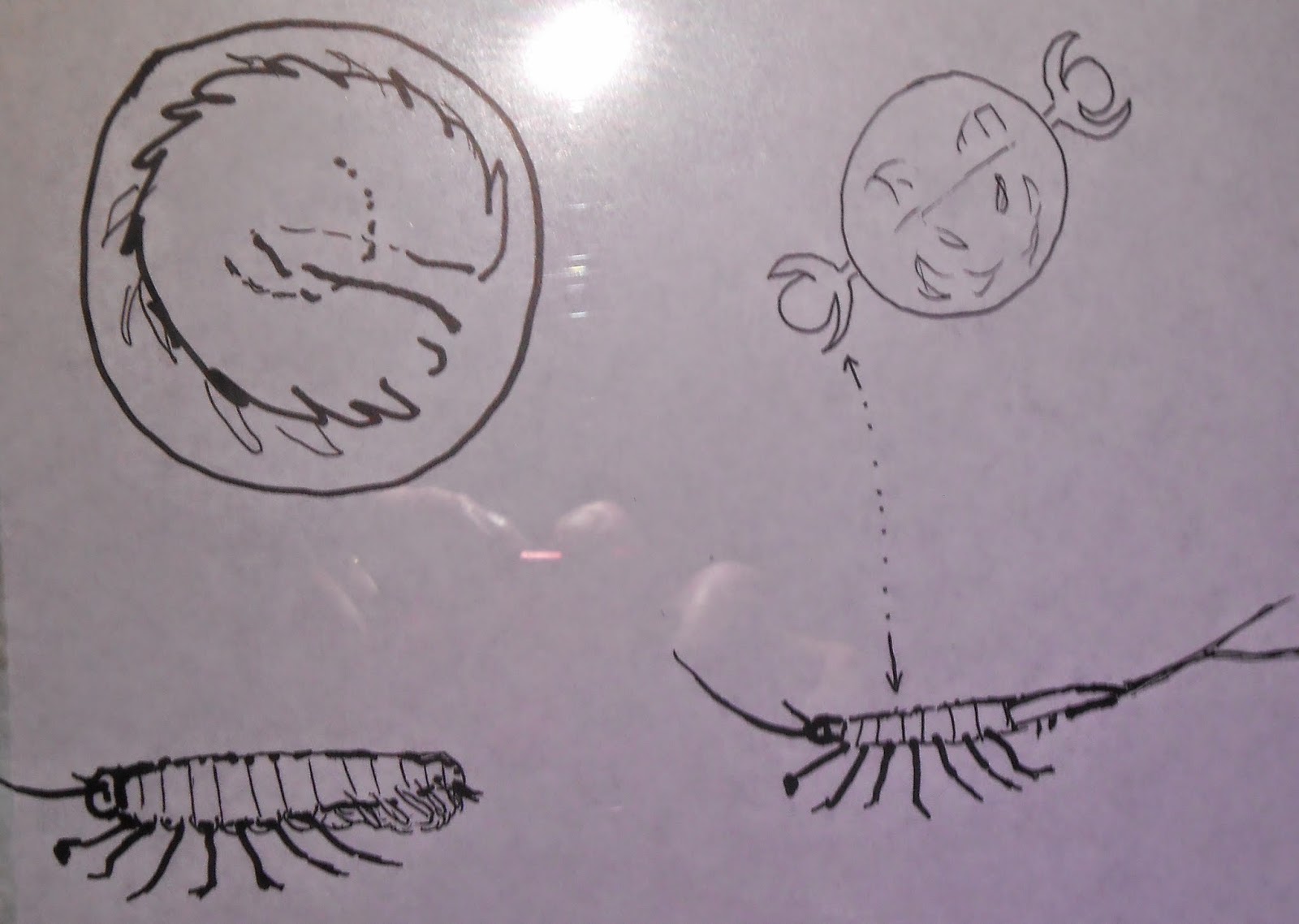 The Tasmanian isopod eggs (upper left in figure above) do not have external appendages.  The Tasmanian isopods have many points indicating a closer relationship to ancestral crustaceans.  The Michigan ones, in addition to having the egg appendage, have dorso-ventral flattening and fusion of abdominal segments.  Fossil evidence suggests the antiquity of the Tasmanian variety.The egg appendage presence clearly illustrates that evolution can occur in developmental stages independent of adult evolution.  So the use of embryological features as evidence of relationships has to be done cautiously.  The appendage seems to have homology with a simple bulge (paired bulges, one indicated by central semicircle broken line) in the same position on the side of the folded embryo in the egg of the older group.  A peculiar fact is that the appendage sometimes persists briefly (at the point on the adult indicated by the arrow) on newly hatched isopods as illustrated in Sars' 19th century work on The Crustacea of Norway.  The bulge on the embryo of a South African species similar to the Tasmanian one persisted briefly after hatching in one studied by Barnard.

THE DEMISE OF THE BIOGENETIC LAW

In summary, the egg appendage of some isopods is good evidence that the old biogenetic law - that the development of an individual repeats stages in the evolution of the group - was correctly abandoned. Adaptive features can develop in any stage of the life cycle independently from development of other features.  Although  the theory has been abandoned, the stages often do give clues to relationships when viewed in the proper context.

Posted by Evolution Insights at 7:48 AM