EVOLUTION AND THE OLDEST ANIMAL

The pogonophorans almost certainly include the oldest living individuals among their numbers in abyssal locations.  Bacteria in salt crystals have survived for longer times in a relatively inactive state.  Corals and sponges as noted in my living fossils post of May 30, 2014 probably survive longer as colonial animals that have new growth cover old dying portions.  But the Pogonophora are the champions as evidenced by their tubes in ancient sediments and their molecular relationship to other groups only likely by the fact that they are relatively unchanged from the ancestors of diverse groups.

Evidence from their tubes

If the tubes are vertically positioned in the sediment, the age of the sediment at O (origin of tube) in the diagram above would indicate its age.  If the rate of deposition of sediment is known, D, (the depth) of S (surface) to O can be used to calculate age.

The tubes of many species of pognonophorans are very long and slender.  They may be less than a millimeter in diameter and as much as a meter long.  Many of them are at abyssal depths where sediments accumulate at a rate as slow as 1 mm. per 250 years (a rate noted by Ekman, 1953) for deep sea sediments.  Among faster rates receiving more abundant sediment nearer continental margins, a rate of 3 cm. per 1,000 years (rate from Ericson et al., 1963) is at the other end of the range of likely rates lacking exceptional fast deposition. 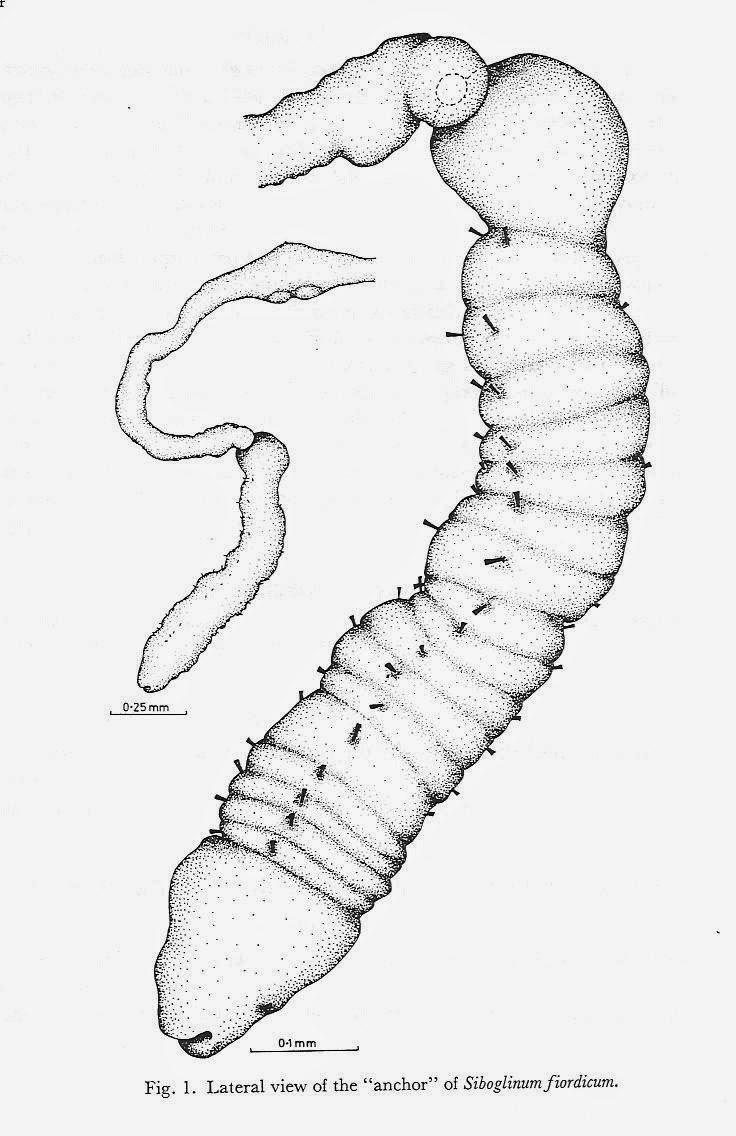 Only the banded portion of the tube indicates original depth because worms with a posterior that breaks
through the tube below are in a portion not banded as shown by illustrations of ones discovered by Webb. 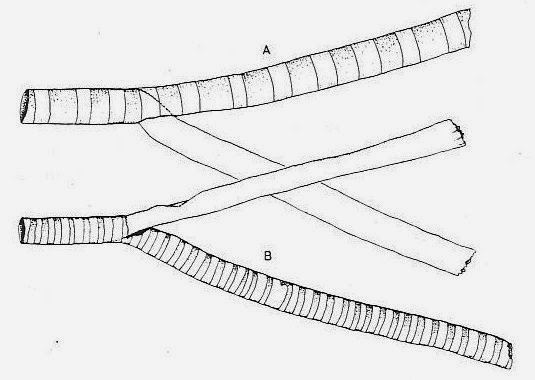 Most tubes have some type of banding undoubtedly associated with growth, but the growth intervals are uncertain in the nearly uniform, almost unchanging seasonality of the deep sea.  Perhaps growth periods are related to the rate of accumulation of sediments or to growth between periods of reproductive stress.  That some have fluted growth rings indicates tubes are stationary in sediments.

Ivanov (1963) illustrates different species of pogonophoran's tubes, many of which have fluting as illustrated with regular or variable spacing.

As noted in the June 22, 2013 post, many features of abyssal depths contribute to slow or prolonged growth.  Physical factors directly slowing growth are constant near freezing temperatures and extreme pressure (perhaps by affecting rates of diffusion needed for life processes to proceed); the physical factor of absence of ultra-violet radiation would not slow growth but would aid survival.  Reduced competition and low predation, a low concentration of dissolved nutrients in the sediment, and K-selected extremes also contribute to survival and long life spans.

Other posts indicate support for the long life by the ancestral position intermediate between the more ancient protostome lineage and the more modern deuterostome lineage.  The vertical orientation is an intermediate condition needed to produce the inversion of systems noted by annelid chordate comparison.  The extreme longevity result in proportionately slower rates of genetic change so genetic similarity to all descendant groups is increased as compared to extremes compared within the new groups.  Failure to account for the various rates of evolution is the main source of phylogeny errors in current views of relationships of phyla.